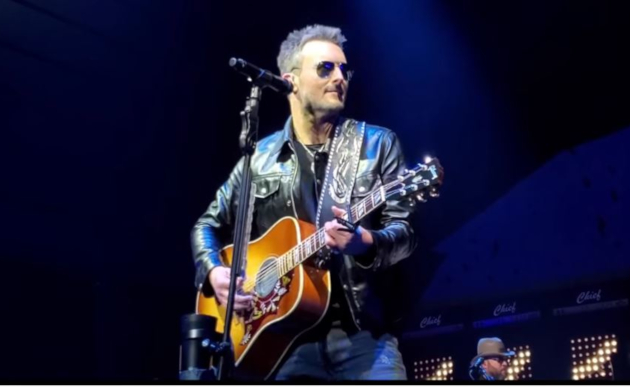 Well well, it’s getting chippy out there after Eric Church and others lost the 2019 CMA Entertainer of the Year honor to Garth Brooks. Some believed Eric Church and Carrie Underwood were the two front runners for the biggest trophy in country in 2019—Eric for turning in the highest grossing touring numbers during the eligibility period, and Carrie Underwood for having a landmark year and having a groundswell of support behind her as sole woman nominated for the award. But in the end it was Garth that swept in to get it.

At Eric Church’s show at The Anthem in Washington, D.C. on Saturday, November 16th, he was singing a rendition of “Are You Sure Hank Done It This Way” by Waylon Jennings. One of the most recognized protest anthems in country history that Waylon made a #1 in 1975, Eric Church has been known to cover the song in concert upon occasion. But this time he changed one of the lines to, “I know Garth didn’t do it this way” before cracking a smile, shrugging his shoulders, and taking a victory lap around the stage during an instrumental break. The crowd sure seemed to know Eric’s intention, and roared in approval.

The show was part of Eric Church’s current “Double Down” tour, and he played The Anthem the night before as well. Numerous concertgoers brought signs to the concert proclaiming Eric Church as the real Entertainer of the Year. Eric Church acknowledged the signs, and then said, “I told ’em I said, ‘Listen, I’m fine with it. [But] you pissed the wrong fans off.”

“That pissed me off,” Church said in 2018. “To me, lip-syncing is and always will be a red line. It’s fabricated. I don’t want young artists thinking it’s OK, because it’s not … So the winner of the biggest category of the night lip-synced in the biggest moment on the show? Fuck that! And I didn’t like his excuse at all. I felt like he was speaking for the other nominees. I can speak for myself—I’m not lip-syncing. If I can’t sing, I won’t sing, or I’ll sing badly. But at least you’ll get what you get.”

The winner for Entertainer of the Year is always met with great interest, and often, controversy. But this year it has felt especially contentious. Eric Church is known for ruffling feathers. He once got kicked off a Rascal Flatts tour for playing too long, and too loud, and once called out Blake Shelton for his participation in The Voice. Now he’s taken another shot at Garth.