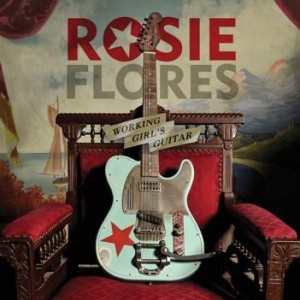 There’s just something in the way boys and girls are wired differently that makes female lead guitar players a rarity. But when you find one, man, what a musical treat.

Rosie Flores is rockabilly royalty. You can draw a direct line from Rose Maddox, to Wanda Jackson, to Rosie Flores, and she takes her role as the “Rockabilly Filly” seriously, helping to revitalize the careers of both Wanda and the “Female Elvis” Janis Martin when she invited them onto her smash 1995 release Rockabilly Filly.

A Member of the Austin Music Hall of Fame, she was dubbed the “female Dwight Yoakam” when she emerged out of the new traditionalist scene in Southern California. But enough comparisons with the boys, Rosie is a world beater all her own, recently making headlines by raising money and posthumously releasing Janis Martin’s The Blanco Sessions, as well as creating and performing a multimedia presentation for Janis at the Rock n’ Roll Hall Of Fame.

And as if Rosie wasn’t busy enough, here she is releasing her 11th full length album Working Girl’s Guitar through Bloodshot Records on October 16th. This raucous and rebellious collection of songs features Rosie for the first time handling all the solo guitar licks herself and writing some new original tunes along the way. Touching on rockabilly, surf, blues, and country, Rosie slays all comers and proves why she remains one of the most entertaining, energetic, and influential female guitar players around today.