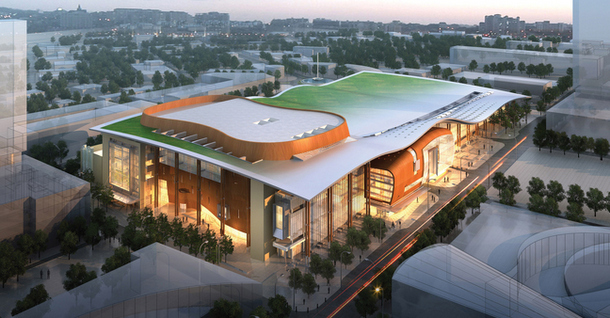 On Thursday Oct. 4th, Nashville Mayor Karl Dean announced plans to permanently locate the Songwriters Hall of Fame to the new Music City Center, the behemoth convention center and hotel complex in downtown Nashville being built right beside the Country Music Hall of Fame. It was announced previously that the Country Hall Of Fame would be connected to Music City Center and have some shared space between the two buildings. Now the Songwriters Hall of Fame whose home has been virtual up to this point, will have a permanent place as part of the project.

But there is an important wrinkle to this story that is going unreported.

As important of an institution as the Songwriters Hall of Fame is, it may not be the most deserving of a spot in Music City Center. If all things were equal, that opportunity would go to the Musicians Hall of Fame: the institution that was imminent domained by the City of Nashville and given a week to remove its artifacts before being bulldozed to make way for the new building. And more importantly, the Musicians Hall of Fame was the one initially promised the space.

The Musicians Hall of Fame opened in June of 2006 just across 4th St. from the Country Hall of Fame in Nashville, with the charter of showcasing the unsung heroes of music: the musicians behind the big names, and the big names that are excellent musicians as well. Though located in Nashville, the Musicians Hall of Fame didn’t showcase just country music, but all genres, and hosted music lessons and workshops, as well as private events in their museum space.

When plans were launched for the new Music City Center complex, it was determined by the City of Nashville that the Musicians Hall of Fame had to go. Nashville initially reached out to the institution and offered them a space in the new building.

“We were told that they would provide us a place to go for free while the construction was goin’ on for the convention center for the next three years, and then we would move into the new convention center,” says Joe Chambers, the founder and CEO of the Musicians Hall Of Fame. “They brought plans over, they had the plans drawn out for us.”

This is where the story gets worse.

Since the Musician’s Hall Of Fame was a museum with no home, they were forced to put all of their artifacts in storage. Then in the middle of May, 2010, when downtown Nashville experience historic flooding, the storage place housing the museum’s artifacts was flooded, destroying many of the priceless instruments, including the first drum ever played on the Grand Ole Opry, the upright bass played in Hank Williams’ last recording session, and guitars from people such as Jimi Hendrix, Peter Frampton, and Johnny Cash.

The question that citizens of the City of Nashville and citizens of the music community should be asking is how did the Songwriters Hall Of Fame and the Musicians Hall Of Fame get swapped in the Music City Center project? If there is enough room for a hall of fame on the premises, why would the preference not go to the one initially promised the space, and whose home got razed in the construction?