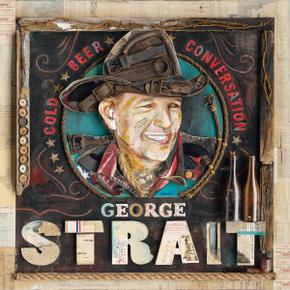 We knew George Strait couldn’t keep from stirring for too long. Though he played his final shows as a touring artist in 2014 on his way to racking up astronomical numbers for his farewell junket and finding himself being named Entertainer of the Year by both the CMA and ACM Awards for the effort, you had to know he wouldn’t sit tight for good.

Announced on Tuesday (9-22) at noon Texas time via a streaming press conference from Las Vegas, George Strait is releasing a new album Cold Beer Conversation exclusively via Wal-Mart and Apple Music on September 25th (yes, this Friday). A new single “Cold Beer Conversation” is also on its way.

Also announced as part of the Las Vegas press conference, George Strait will be one of the first performers to take the stage at the new Las Vegas Arena currently under construction. King George will perform at shows on April 22nd and 23rd, and September 9th and 10th. It’s not necessarily a Las Vegas residency, but it is George Strait returning to live performance. Kacey Musgraves will be the opener for the Las Vegas shows.

Cold Beer Conversation has an impressive list of songwriting contributors, not limited to Jamey Johnson, Brandy Clark, Bill Anderson, George’s son Bubba, a George himself is responsible for a couple of co-writes. You can find the full track list below via Windmills Country.

“I think it’s a great record. I always say this, but I think it’s the best record I’ve done,” George said at the press conference. “You got to go into the studio thinking that way.”