Hank III in Billboard Top 10 For All The Wrong Reasons

This week the music world was agog that Lady Gaga topped the charts with her latest album Born This Way selling over 1 million copies, though some are crying foul because 440,000 of those album were bought on Amazon for only .99 cents, making NPR wonder if this is the end of the album as we know it. It makes me wonder again if there is too much free music. 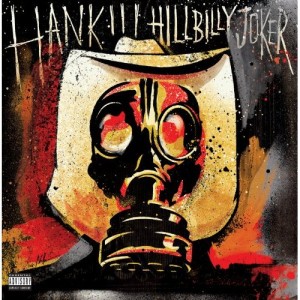 But I was neither shocked nor appalled that Lady Gaga made #1. What blew my mind was to see the post-contract Hank III release from Curb Records called Hillbilly Joker crest #10 of the Billboard country charts last week, and it still sits in the Top 40.

The nearly 10-year-old album was rejected by Curb for release when Hank III turned it in originally because of concerns for the commercial viability of the content, which begs the question of why it’s OK to release it now that the music is 10-years-old, and not germane to Hank III’s current sound? Curb is in a legal battle with Tim McGraw right now over his album Emotional Traffic, with the label saying the songs are too old to use. But the release of Hellbilly Joker proves that Curb has no problem publishing old songs, and a Top 10 album by a much more underground artist than Tim McGraw proves that old songs can still be commercially viable and culturally relevant.

By waiting to release Hank III’s Joker until after his contract has expired, Curb was able to squeeze an extra album out of Hank III’s deal. Is there any question that is Curb’s aim with Tim McGraw?

But how did we get to this point? How could Hillbilly Joker crack the Top 10 when Hank III himself has not been promoting it, has been avoiding any media interaction, positive or negative, in fear of drawing attention to the album, and even told his fans “Don’t buy it, but get it some other way and burn the hell out of it and give it to everyone.” And Joker has been circling around Hank III’s fan base and the underground for years as a free bootleg. So much of Hank III’s fan base already had it.

In some respects it is heartening that a virtually unknown, underground artist can crack the Billboard Top 10, but he cracked the Top 10 for all the wrong reasons. If you’re reading these very words right now, you know the scoop about Hillbilly Joker, but thousands of people who simply saw the album advertised in their local record store, or for sale for $3.99 on Amazon, bought it and took the word of Curb that it was new material.

Maybe Hank III should have been more active in trying to get the word out, maybe Saving Country Music should have been, but in the current media world, the sick reality is that may have encouraged people to purchase it simply for the car crash factor. People now pay attention to music because it is bad instead of in spite of it (ie Rebecca Black & “Friday”), or just to see what all the hubub is about, or because it’s only $3.99, or .99 cents. This creates a situation where a Top 10 by Hank III, or a #1 by Lady Gaga doesn’t really help the music world judge the popularity, creative aptitude, or commercial viability of those artists.

Right now the music industry is in the equivalent of a drunken stupor, searching for the horizon in an attempt to figure which way is up and down. And if it cannot right itself, the next thing that will catch its eye is four horsemen descending from the clouds. Meanwhile Hank III must be wondering what Curb’s success with Hillbilly Joker will do to his career, and so must Tim McGraw.

Okay the only reason I cannot like this album is because the name on it. I bought this to hear Hank III not Assjack. I have an old bootleg of “This Aint Country” witch is a better version of this (with other songs). The tracks on here are more punk/metal than they were on the previous recording. It is good if it was Assjack but I didn’t buy Assjack.

Preordered and wish I didn’t. Not like Hank iii albums at all. Sounds like assjack which is not bad but not what I wanted. Oh well really don’t like the 3 mins of donkey sounds.

That’s right! I feel like the jokes on me. That’ll teach me to pre-order anything.
I love Hank 3’s Country stuff, can tolerate a little bit of Hellbilly & turn off Assjack.
Well this release sounds mostly like ASSjack. Only Hank’s Assjack fans will appreciate this material.

I’m 57 years old and mostly listen to 50’s and 60’s honkytonk. When I discovered Hank III’s country stuff, I thought I had a new favorite artist and I bought everthing he had out. Some songs sucked but most rocked. I pre-ordered this without waiting for samples to hear. Joke was on me! There is not a single track that is not awful from my perspective. There is nothing that resembles country here. Could be metal, could just be noise? All the same to me. I should know better than to buy without listening. This object lesson should keep me from doing it again.

Feeling a little ripped-off. Hillbilly Joker should have been released as an Assjack project (the III’s thrash noise band). I would never call Hank III “country” but this isn’t even close to other releases under the Hank III name. At least at his live shows, I can walk out when he switches into Assjack-mode. No such luck with this release. You got me, III. I should have listened to the sound bites before clicking the buy button. At least I got it at the Amazon $3.99 price. If you are out of ideas, why not cover Wayne Hancock and maybe even Unknown Hinson for your next Hank III release and leave this mess for Assjack fans?