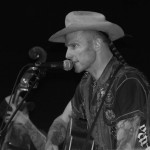 Hank Williams III has been known for years as a big advocate for animals, taking in strays and using his celebrity status to find them new homes, and partnering with Happy Tails Humane in Franklin, TN to raise awareness and money for the no kill shelter. On Friday August 3rd Hank3 played his 4th Happy Tails concert benefit at the Marathon Music Works in Nashville, a newer venue who donated the space for the event. Dubbed “One Big Wag,” Hank3 and his fans raised a whopping $18,000 for Happy Tails, the most money Hank3 has pulled in for a Happy Tails event so far.

“The event was very successful,” says Hank3 fan Cathy Pippin who made the drive from Kentucky. “I saw some of the regulars, folks from out of state, just a great bunch and everyone had a blast. Shelton & the band rocked country & hellbilly sounds for 2 1/4 hours non-stop!” 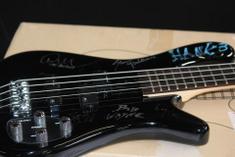 Opening for Hank3 was Tomi Lunsford (watch video), and also in attendance was Bob Wayne, Hank3’s mother, and his sister Holly Williams who later took to Twitter to say, “What an amazing show by HANK_III tonight, you all need to find a city near you to check it out… ”

Hank3 will be leaving on a Texas/West Coast tour in a few days.

“Happy TALES Humane has been fighting the good fight for the homeless pet population in middle Tennessee since 1996,” says Kat Hitchcock. “We are thrilled that Hank3 would support our mission. He doesn’t just support it, he lives it. He is a genuine advocate for animal welfare. We are extremely fortunate. We can’t thank him enough.”

Along with ticket sales, there was also a raffle for a bass guitar singed by Hank3, his band, and Bob Wayne. You can watch the full concert below:

*Thanks to Cathy Pippin and Wayne Titsworth for photos and video