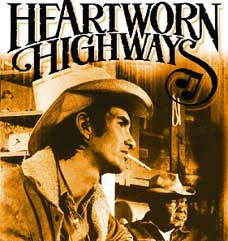 The legendary Outlaw country documentary Heartworn Highways, featuring Guy Clark, Townes Van Zandt, David Allan Coe, Rodney Crowell, Gamble Rogers, Steve Young, The Charlie Daniels Band, and many more, has finally been released completely remastered for digital on-demand viewing and download. Filmed in late 1975 and early 1976, but not released until 1981, Heartworn Highways captures the country music Outlaw movement and some of its most important contributors in the infancy of their careers. Some of the scenes and music have gone on to become some of the most memorable moments of country music lore.

The new remastered, online version of the film was released on December 25th, (2012), but because of the holidays, went virtually unnoticed. Original copies of Heartworn Highways, including copies of the 2005 DVD release regularly sell for $90 and over on eBay and Amazon, speaking to the wild demand for the movie. The DVD included additional scenes not in the original movie. The new remastered version is available on Amazon, iTunes, YouTube (see links below), and other online streaming services. The filmmakers released a statement on Christmas for the re-release.

As part of the small filmmaking team, this release is extremely special, one we’ve been cautiously anticipating a very long time. Despite the initial favorable reviews and enthusiastic response at festivals, our film did not make it at the theatrical box office when it was initially released over 30 years ago. Few people understood it back then. So, it has been deeply gratifying to watch the film, which somehow survived underground, until the DVD was released 10 years ago. There is now a burgeoning community of folks who love the film for its timeless pleasures, honest evocation of that moment in American history and of the lives & music of such extraordinary talent. Thanks to your awareness and support we have been able to digitally save and clean the original release negative so that today we can finally bring it to you fully remastered: here it is, Heartworn Highways, in HD and Stereo, enjoy & share it.

On Sunday February 10th at 2 PM EST, the filmmakers will be participating in an online chat on Facebook about the film. A brand new trailer for the film can be seen below, followed by one of the film’s most iconic scenes.