“High Cotton: A Tribute To Alabama” Is A Tribute Done Right

I’ll be honest with you, I wanted to hate this album, and for many reasons. It begins with a general dislike of tribute, compilation, and cover albums altogether. We live in such a crowded music world, do we really need to hear a song that was perfectly fine the first time done some other way, or virtually the same way from a different artist? Sure it’s cool when they sneak one in on you in the context of an original album, but 14 reconstituted tracks stacked together can get unbearable.

And this particular album seemed like such a ploy. Alabama doesn’t really hold any sway on the heart of your average independent roots artist or their listeners—generally speaking of course—so it seemed like the idea of taking Americana names like Jason Isbell and Jessica Lea Mayfield, and mixing them with Texas/Red Dirt country artists like the Turnpike Troubadours and Jason Boland was just a way to trick people into paying attention to Alabama who otherwise wouldn’t.

And yeah, I’ll say it: Though I’ve always found a good handful of Alabama songs entertaining enough, and maybe some of their album cuts hold a little more substance than they tend to get credit for, they were sort of a mild band when looking at them in the big country music picture.

Alabama was quick to call on stereotypical references to the South and Alabama and evoke artifacts of Southern living in their songs, certainly laying at least some of the groundwork leading up to the parade of laundry list songs country music is plagued with today. That’s not to discount their entire catalog in any way or to imply their songs weren’t enjoyable, but Alabama “was what they were” so to speak—an accessible, sort of one-trick, songs-about-the-South pony that probably doesn’t deserve two tribute albums coming out for them in a month span.

And that’s the other thing. While Americana/Red Dirt fans were pouring over the lineup for High Cotton: A Tribute To Alabama, salivating at names such as JD McPherson, Bob Schneider, John Paul White (The Civil Wars), and Shonna Tucker (Drive By Truckers), on the other side of the music world amidst the multiple wallet chains and Auto-tuned voices of mainstream land, they were looking at a completely other tribute album called Alabama & Friends that includes names like Jason Aldean, Luke Bryan, and Florida Georgia Line. This 1 – 2 punch seemed to be part of a plan to create a widespread Alabama resurgence across the entire music panorama, tricking us into losing perspective on Alabama’s overall stature in the country music pantheon.

And wouldn’t it be so typical of one sect of fans to rally behind their particular Alabama tribute, and poo poo the other. Isn’t there enough new, original music out there right now that is more worthy of our time and ears instead of engaging in some culture war over ho hum, rehashed music? 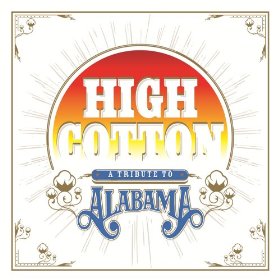 But believe it or not, I like this album. I like it a lot. And its appeal goes beyond the sexy names of contributors, which is how they get you in the door. High Cotton: A Tribute To Alabama offers a great mixture from how the respective artists approach each song. Your country artists, like the Turnpike Troubadours with “If You’re Gonna Play in Texas (You Gotta Have a Fiddle In The Band),” and Jason Boland with “Mountain Music,” play it pretty close to the original, not trying to get too cute.

Then you have more progressive artists like Jessica Lea Mayfield going in a completely different direction with her rendition of “I’m In A Hurry (And I Don’t Know Why)”—wholesale changing the feel and theme of the original composition without touching a word, making a fun song into a haunting indictment of modern life. Then you have an artist like JD McPherson truly putting his own throwback, 50’s-vibe on a song with “Why Lady Why.” As the clichÃ© for cover songs go, he “made it his own.”

High Cotton: A Tribute To Alabama gets right what so many cover and tribute albums get wrong, including its 2013 counterpart Alabama & Friends. A good tribute album doesn’t just pay tribute to the band or artist. It should be a 50/50 proposition, with the contributing artists also benefiting from the name recognition the tributee affords. You can tell the contributors had any and all latitude they desired to take these songs wherever they wanted, or to leave them pretty much the same if they so chose. And most importantly, when you’re listening to this album, you being to think, “Damn, Alabama did have some pretty good songs, didn’t they?” That’s how you know when a tribute album was a successful endeavor, when it has the power to change a mind, or remind you of something you had forgotten, or introduce something to a generation who has no sentimental tie to it.

A fun exercise with this album is to simply turn it on before looking at the track list and trying to determine which artist the song is being done by simply from the style and the singer’s voice. It is sort of an aptitude test to check your level of independent country and roots knowledge. There’s a few moments on the album that lost me, like T Hardy Morris extending the guitar solo at the end of “High Cotton” so long seemed a little self-indulgent, but even this will be cherished by the right ear. The Bind Boys of Alabama finishing off the album with “Christmas in Dixie” works even in the swelter of mid September because of the inspired performance they turn in.

Cover and tribute albums will always be held at a disadvantage because of their lack of original content, but I would put High Cotton: A Tribute To Alabama near the top of some of the stronger tribute efforts to grace the ears of the country music world.