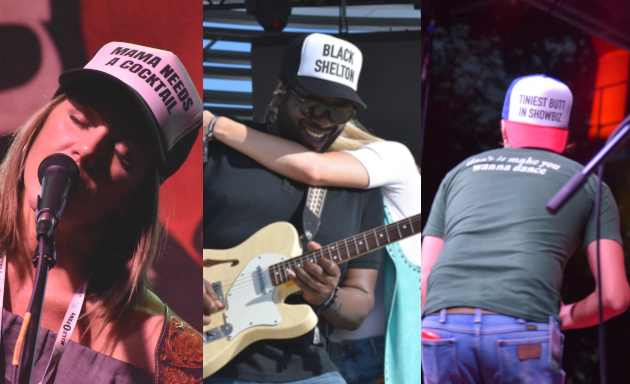 It’s not a common occurrence that a vendor at a music festival has such an impact on the event that it feels like an integral part of it. Of course it’s not uncommon to see the banners of corporate sponsors strewn across a festival site, or maybe there’s a certain food vendor everyone is raving about. But in the Texas/Red Dirt scene, it’s a specific hat seller that has been putting everyone in stitches, and adding a completely different dimension and flair of fun to the festival experience.

Called Uncle Bekah’s Inappropriate Trucker Hats, you couldn’t turn around at Mile 0 Fest in Key West, FL last week without seeing someone wearing one, and it’s been that way for all three years of the festival. And it’s not just the paying patrons participating. The artists get in on the fun too, and wear the trucker hats on stage for the performances. Then as people take pictures of the artists and each other in the hats and post them on social media, the interest goes viral. That is what has happened for the business of Uncle Bekah.

“I went to college in Stillwater, Oklahoma, and I started booking music up there,” Uncle Bekah explains. “Then I started booking music in Fort Worth. I worked for The Ranch (95.9 FM) for a little bit. Then I moved to New Mexico, and I’ve been booking this scene for over a decade. So I knew all the artists from that. I got lucky because I knew them, and they thought my shit was funny. I just happen to have connections with this music scene, so it works out.”

There’s no licensing deal involved here, and what Uncle Bekah is doing isn’t especially groundbreaking. But the artists truly love the hats, and rep them organically. Some performers like Mike Harmeier of Mike and the Moonpies will purchase multiple hats during a festival, and sign them and give them away after a performance.

“I don’t even try,” says Uncle Bekah. “All the ones that the artists are wearing, I’ve sold so many of those from people just wearing them on stage. And then the ripple effect of social media is kind of how my business blew up to where it is now.”

Uncle Bekah’s Inappropriate Trucker Hats adds such a fun dynamic to music festivals, when Joan Monen of the Wild Hare Country Festival in Canby, Oregon wanted to help bring the Texas/Red Dirt vibe to her event in the Pacific Northwest, she knew she needed to have Uncle Bekah be a part of it. “The owner Joan, she begged me to come up there, or maybe I begged her to go up there, one of the two. I sell a lot of hats in Oregon. I have a joke that I’m famous in Oregon.”

The concept of the business is pretty straightforward. It’s Uncle Bekah’s flair for the dramatic and funny that has made what she’s doing wholly unique, with lots of brand loyalty among her customers. It’s not a novel idea to screen print a trucker hat, but Uncle Bekah gives everyone the license to get completely inappropriate with it and be accepted. The more outlandish, the better.

“Back in 2007-ish I was cleaning out the attic at my folks house and I came across a funny black trucker hat with orange print that read, ‘hoof arted’ and I thought it was hilarious,” Uncle Bekah explains. “Apparently, it was a gag gift from my grandpa many many years ago! I started wearing it while bartending in Key West and people from all over the world tried to buy it off my head almost daily. So, I had some made at a t-shirt shop on Duval St. and started selling them to my friends. A couple years and a few states later I bought a hat press.”

When the Texas/Red Dirt-centric Mile 0 Fest decided to bring a festival to Key West in 2018, Uncle Bekah already knew the lay of the land. “I wasn’t making much money booking music, so I said, ‘I need a job. I’m going to make this work.’ So on January 1st last year, I quit booking music and started doing this full time.”

Uncle Bekah also does chopper shows and farmer’s markets, and obviously sells a lot of custom orders online. But it’s her connections to Texas and Red Dirt, and the artists who love to rep her inappropriate hats that have sent to business booming.

Oh, and why the name ‘Uncle Bekah’? “I’m the only girl in a family of 4 and my hilarious little nephew, Autry, started calling me Uncle Bekah because everyone else was Uncle….and that was that.”

To find out more about Uncle Bekah and to purchase hats, go to UncleBekah.com .