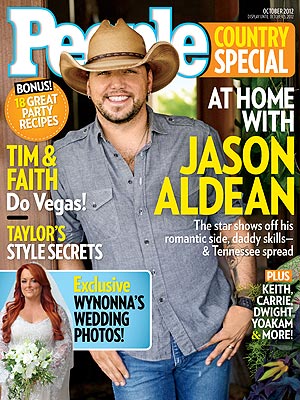 You know, I normally would steer clear of stories like this. But the fact that every time I’ve headed down to the general store for provisions for the Saving Country Music hideout over the last month I’ve had Jason Aldean’s sparking photoshopped teeth whiter than the wind-driven snow starring back at me from a People Magazine cover story showcasing the country singer’s “softer, romantic side” and his “daddy skills,” I thought it would be apropos to point out that TMZ just caught Aldean red handed cheating on his wife.

Aldean, who was performing this weekend in Southern California was snapped at a prominent bar on the Sunset Strip holding onto the hips and kissing former “A.I.” show contestant Brittney Kerr right out in the open. As People Magazine points out, Aldean married his high school sweetheart Jessica Ussery in 2001, and they have two daughters, ages 9 and 5.

And I don’t want to hear anyone say this is the first “country” thing that Jason Aldean has ever done. True, cheating songs are a common theme in country music, but cheating is also against everyone’s values no matter where you’re from, or who you are. This incident is unfortunate, and I feel sorry for Aldean and his family that this information is being dealt with in the public eye, but what’s even more sickening is how the pop machine tried to sell this guy to us as a family man just this month, while millions of country music fans are looking up to him as the highest-selling star in the business right now.

I hope Jason Aldean and his family can work though this difficult time amicably, but I also hope that people realize what a sham they are sold regularly through popular media, on checkout stands, smattering the public airwaves in ridiculous entertainment shows, and on the internet. We all make mistakes, and don’t for a second look down your nose at Aldean and think you’re better. But that is why instead of painting idyllic scenes full of perfectitude that are inevitably going to let us down, the approach should be honesty.

Jason Aldean is up for Entertainer of the Year, Male Vocalist of the Year, and Single of the Year at the CMA Awards in a month, and I wouldn’t be surprised if the People Magazine cover story was part of a propaganda machine attempting to influence votes. Well see if this illumination of Alden’s true colors does any damage to his chances.

Hey Guys I wanted to talk to you directly, so you were hearing the truth from me and not just reading allegations made about my personal life on gossip web sites.
The truth is that I screwed up. I had too much to drink, let the party get out of hand and acted inappropriately at a bar. I left alone, caught the bus to our next show and that’s the end of the story. I ultimately ended up embarrassing my family and myself. I’m not perfect, and I’m sorry for disappointing you guys.
I really appreciate being able to work through this privately with my family and for all your continued support.