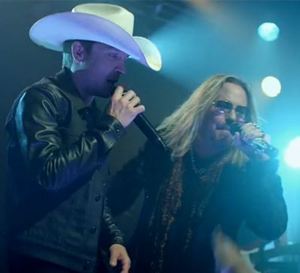 First rule here ladies and gentlemen is let’s not be fooled by the illusion of diminishing returns. If this was 2007, no “country” tribute to Mötley Crüe would even be conceived of getting made, especially one with the combination of pugnacity and ignorace to call itself Nashville Outlaws, let alone release a single to country radio. And yes I know, Carrie Underwood covered “Home Sweet Home” in 2009, but that that was more of a one-off deal for American Idol’s “send-off song” (whatever that means) and was for pop radio, not country. Oh how I wax nostalgic for the days in country when the worst ails you had to worry about were the encroachment of reality stars and Keith Urban’s nude photos in Playgirl.

This Nashville Outlaws tribute is the country music equivalent to the 1982 flick The Toy, with Mötley Crüe as Richard Pryor, and Scott Borchetta as Jackie Gleason. Still left wanting after his own hair metal band Burning Hearts went down in a blaze of glory, Borchetta has wrangled his Big Machine roster into living out his spandex and aqua-net dream for him since he’d strain a hammy trying to do the splits off of a drum riser these days. Somehow this is all supposed to bowtie with Mötley Crüe’s farewell tour, and actually, it might do so well since mainstream country is the last bastion of pliable music fans who are gullible enough to worship whichever golden boys corporate America puts up on stage in tight pants and charges $75 to see from the nosebleeds.

But as fun as it is to hoot on mid 80’s hair metal, the simple truth is when you delve into some of the ballads of these bands—and each of their albums can be good for one or two of them—they were not terrible, and can still translate to the modern ear to some extent. It’s an interesting observation that a band like Mötley Crüe would make sure to include a few songs of substance on their records so they could release them to radio and justify the rest of their wankery, while in modern country it’s the opposite: they bury any substance in “album cuts” so they have something to point to and say their music is not all fluff, and release the most horrifying examples of their sound to your local FM transmitter.

Songs like Poison’s “Something To Believe In”, or even Mötley Crüe’s “Home Sweet Home” were not half bad when you really sit down and listen to them. Holy shit, there was actually a story behind them, and a little bit of feeling. Why can’t modern country be influenced by that element of butt rock and not just the pyrotechnics and penis twirling? The opening piano riff of “Home Sweet Home” has withstood the test of time, at least more than guys with perms have, but of course right off the bat, in the new Justin Moore single version of the song, they have to underlay a stupid-ass digital dance beat under it like every other radio single in country right now, then they overlay a wanked-off guitar solo to boot. Couple that with the very opening scene in the stupid video for the song (see below) showing a shot of “Nashville Outlaws” on the top of a bus, and any good will or open-mindedness going into this song is eroded.

I commend Justin Moore for choosing a bold key much above his usual range and comfort zone to sing this song in to attempt to revive that Vince Neil vibe, and I’m not surprised Moore can sing in such a high register because there’s never been a question about his voice, aside from the nagging detractors convinced his Southern accent is a put-on. But when you combine Justin’s high pitched part with Vince Neil’s contribution to the reboot, there’s just a whole lot of screeching here that veers quickly towards being unpleasant to the ear. They tried to do too much here; they added too many layers of vocals and stunt guitars, suffocating what otherwise might be a somewhat decent offering. Only at the very end does some space open up to let the melody of the song resonate. 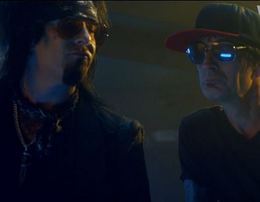 I have to take issue with a few things in the video, principally that they show the marquee of the legendary venue Layla’s on Lower Broadway in Nashville and Justin and Mötley Crüe walking into it, but when they cut to the live performance parts, they pull a bait and switch and show live shots of a stage that certainly doesn’t belong to Layla’s. And near the last of the video, it cuts to Nikki Sixx and Tommy Lee nodding in approval in a moment that might be one of the most canned images in country music history. I’d almost rather see Tommy Lee pilot Pam Anderson’s dingy with his male appendage than such staged production as those two wash-ups display in that moment. Good gosh, where is their dignity?

I don’t know. As much as I want to give this song a tidbit of credit, it’s only because when held beside its current peers, it at least has a pulse. But we shouldn’t be releasing rehashed hair metal songs to country radio, or making tribute records to Mötley Crüe when there is much more worthy county stock that could use the attention. This is not as much terrible as it is ill-advised and mislabeled.