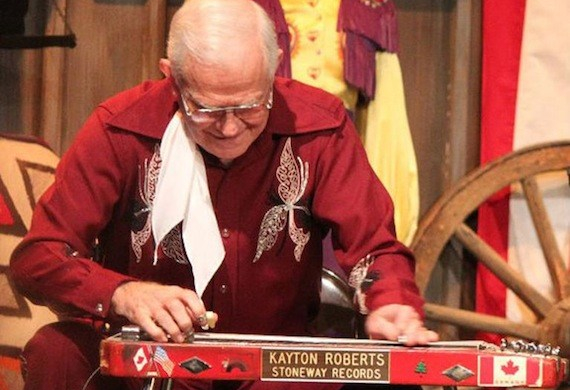 It’s hard enough for side players in any genre to receive the recognition their contributions to the music deserve, let alone ones who choose a discipline that is a dying art. Kayton Roberts had it hard enough as a steel guitar player, whose numbers seem to be dwindling more and more every year as the appeal for the signature moan that is vital to the sound of true country music continues to fall out of favor in the mainstream. But Kayton’s instrument of choice—the pedal-less steel—was in even less demand throughout his 60-something year career. Yet someone had to keep the sound alive and show younger players with interest in the obscure discipline the ropes. And for years that was Kayton Roberts.

Known mostly for his service as the steel guitar player for Hank Snow’s Rainbow Ranch Boys starting in 1968, and for playing with the Canadian country star all the way up to Snow’s death in 1999, Kayton Roberts also recorded and played with the likes of Ricky Skaggs, Marty Stuart, Willie Nelson, Dolly Parton, Randy Travis, Aaron Tippin, John Fogerty, Billy Walker, Riders in the Sky, Alison Krauss, Billy Joe Shaver, Chubby Wise, Brother Oswald, and others throughout his legendary career.

“By the time he moved to Nashville it was all about pedal steel, pedal steel. Buddy Emmons, Buddy Emmons, Buddy Emmons,” explains Andy Gibson, a fellow pedal-less steel guitar player who made his name for many years touring and recording with Hank Williams III. “Even though he could pretty much play circles around a lot of those guys, people listen with their eyes, and so he didn’t get much recognition. If he had moved to Nashville in ’52, he’d probably be in the Hall of Fame right now. It was the wrong place at the wrong time.”

Born Kayton Author Roberts in Ona, Florida on November 25, 1933, Kayton started playing music around the age of 10 in his father’s country band, eventually leaving to perform in radio stations and local TV bands in Gainesville and Jacksonville. In 1964 Kayton Roberts received his first national recognition when fellow steel player Jerry Byrd recorded his song “Chime In” on his Admirable Byrd record.

Kayton moved to Nashville a few years later, and played rhythm guitar with Hank Snow initially. “He was good friends with Chubby Wise. He and Chubby are from the same town in Florida,” Andy Gibson explains. “Chubby got him the gig playing rhythm guitar with Hank Snow, and was playing with him for about two years. Jimmy Crawford was playing steel. And when Jimmy left, Hank Snow got wind that Kayton knew that style that he likes. That Joe Talbot, Jerry Byrd kind of stuff. So Kayton was the steel guitar player for [Hank Snow] until he passed away.”

Different from the pedal steel guitar—where the players utilize pedals and knee levers that allow the instrument to make its unique, bending sound—the pedal-less steel is its own separate discipline, and hearkens back to the earliest times in country music when the steel guitar was very first introduced. This was the sound of Hank Williams and others, popularized after World War II, partly due to the appeal brought back home from GI’s who first heard the sound in the Hawaiian Islands, and also for the instrument’s ability to mimic the sounds of the old train whistles. Sometimes the instrument is also referred to as a stand up steel, or a unpedaled lap steel, though it’s played on legs and with a double neck unlike a more customary lap steel guitar.

“It’s a totally different sound, and if you ask me, it’s a totally different instrument,” says Andy Gibson. Pedal-less steel players rarely play pedal steel, and vice versa. Though most country artists desire the more recognizable sound of the steel guitar, including the older and more traditional ones, when Hank Williams III went to record his 2002 album Lovesick, Broke, & Driftin’, it was the specific, vintage moan of the Kayton Roberts pedal-less steel that he sought.

Aside from a 1992 interview in Steel Guitar World, an appearance on The Marty Stuart Show, and a few other pieces of press, about the only recognition Kayton Roberts received beyond his peers was in the insert for Hank3’s Lovesick, Broke, & Driftin’ record. It included a four paragraph bio and appreciation for Kayton, along with a picture of the steel guitar legend on the stage of the Grand Ole Opry—a spot Kayton knew well through his years of service to Hank Snow and others.

“Kayton Roberts is as genuine as they come, and there’s little he can’t do on that old red Fender steel guitar,” read the liner notes. “Just remember when you hear that train whistle coming, look out, it’s probably Kayton.”

He played a 1951 Fender model steel with a Canadian flag on the front from his Hank Snow service time. And when not out playing on the road, Kayton Roberts had a day job for many years retreading tires if you can believe it. He wrote numerous instrumentals for the steel guitar that are well-known by steel guitar aficionados, and released a total of seven albums on his own beyond his contributions to other artists.

Kayton Roberts died on Thursday, July 13th after suffering a stroke. He was 83-years-old. Kayton is survived by his children Louis Roberts, Jan Roberts-Williams and Martin Roberts, and five grandchildren. A funeral will be held July 23rd at 4:00 p.m. at The Church at Grace Park, 506 Hester Drive, in White House, TN. A celebration of the life of Kayton Roberts will follow.

Only a few true pedal-less steel guitar players now remain, including Andy Gibson, Cindy Cashdollar, and a few select others. But if not for Kayton Roberts, the specific discipline of pedal-less steel that is so vital to the original sound of country music, may have died off decades ago.