Kenny Chesney’s “The Big Revival” is a Big Letdown 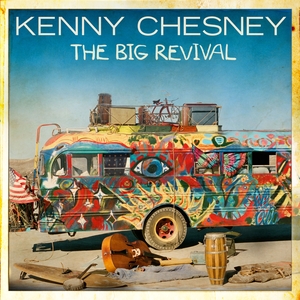 All we’ve been hearing from Kenny Chesney in the run up to the release of his new album The Big Revival is how badass it is going to be because he took an entire year off of touring to focus on it, at one point scrapped an entirely completed album awash in beer and tailgate songs to make it, and did some serious soul searching about the direction he wanted his four-time CMA Entertainer of the Year-winning career to go before carefully selecting songs and getting into the studio to really craft an album that would have a paramount impact on country music and Kenny’s career arc. And what do we get after all of this hype? A straight ahead rock album and songs about beer can chicken. Apologies to Mr. Chesney and the No Shoes Nation, but I’m not feeling this one.

“It’s everything I wanted to feel when I decided to back away, but that all had to start with the music,” Kenny Chesney told The Tennessean recently. “I had to protect that investment with the fans and this wonderful connection that we have. I think (time off) really allowed me to make a record with a clear head, with a new energy, with a sense of grabbing my audience by the hand and bringing them along with me to places I wanted them to go.”

Producer Buddy Cannon explains, “He called me up and he said ”¦ ‘This isn’t the record I want,'” speaking about the album they threw on the trash heap supposedly. “Red dirt, tailgates, he didn’t want to do it. He and I both love great songs, and they are hard to find…”

This all sounded so promising, like we had something really huge in store; the “big revival” of Kenny Chesney’s career. And the album starts out somewhat interesting with the title track. It’s not particularly special, but it’s just weird enough with its snake preacher setting to get you intrigued at what might be forthcoming like a good opening song should do. From there however you get one song after another that is simply a refugee from the implosion of mainstream rock radio. Similar to Eric Church’s The Outsiders, The Big Revival is a rock album through and through, but at least Eric had some boldness and a few good songs mixed in. There may be some acoustic moments you could stretch to call country, but overall The Big Revival is right out of the arena rock playbook.

In fact there’s a song on the album called “Rock Bottom,” and it speaks specifically to being in a dour mood and purposely skipping country albums because apparently they’re not the “good stuff” to instead find your emotional respite in AC/DC riffs.

Yes ladies and gentlemen, I think this is a new low for country, where you have a country star name dropping past legends to then turn around and say their music isn’t as effective as screaming Marshall stacks. They aren’t “the good stuff.”

I just kept waiting for that one song that would show me what Chesney was talking about by grabbing the audience by the hand with great songs. Somewhere I expected to run into some emotional love ballad at least that would afford something a little deeper to latch on to, but the closest thing we get is an ode to Chesney’s tour bus in “If This Bus Could Talk,” which is actually one of the better songs on the album. Another much ballyhooed point of marketing emphasis for The Big Revival was the song “Wild Child,” which Chesney presented as a polar opposite to the objectifying songs of Bro-Country.

“In the last several years, a lot of the songs about women have been written in kind of an objectifying way,” Chesney told radio.com. “‘Wild Child’ is telling some girl out there that’s got dreams, that’s a free spirit, who’s smart and interesting, that she has a chance. That she is worthy.”

What a load of garbage that is. This is Kenney Chesney trying to throw his hat in the ring in this whole anti Bro-Country realm, but this isn’t Maddie & Tae’s “Girl In A Country Song.” This isn’t even Brad Paisley’s “Shattered Glass.” This is a song about some loose groupie being passed from tour van to tour van that Chesney’s trying to tout as inspiration for female self-worth and free spirited-ness because he thinks it’s expedient and will woo critics. “She’s Penny Lane in a Chevy van. She loves to love,” the lyrics say. The song actually presents an interesting female character and is kind of fun, but talk about an oversold misnomer.

“Drink It Up” and “Save It For A Rainy Day” are just fatuous drinking songs at their core. “American Kids” is an audio curiosity shoved down the throats of America so hard is sprouted a hit single, and “Flora-Bama” is a boring account of someone sitting in a tourist trap and describing what they see.

The song “Don’t It” does have a little something, but the presence of a cajÃ³n threw off the grit the song tries to convey, and “If This Bus Could Talk” as mentioned before is not half bad. And it must be said that there’s no rapping here, no Bro-Country in the stereotypical sense at least, and no EDM intros to songs like what pervades the mainstream these days. But should we be handing out brownie points for things that a few years ago we would have never dreamed of hearing in country anyway? The appearance of steel guitar, banjo, and fiddle on this album is somewhere between anemic and non existent.

In what feels like a period where country music is trying to improve its image and depth, and especially with all the rhetoric ahead of this album’s release, The Big Revival comes across as a big letdown, despite what some critics who get swept up in the marketing might say. Though maybe the joke’s on us for ever believing this album had a chance in the first place.