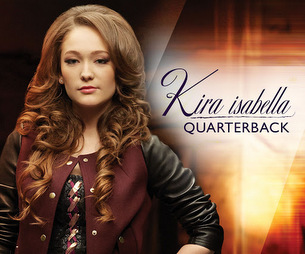 “Quarterback” is a song by female Canadian country star Kira Isabella; the first single from her upcoming Sony Music Canada release Caffeine & Big Dreams. It was released to the Canadian market on March 25th, and has performed fairly well, cresting Canada’s Hot Country Billboard songs chart at #10. Written by Rivers Rutherford, Bobby Hamrick, and Marti Dodson, the song tells the story of a young girl from the high school freshman class who is seduced by the star quarterback of the football team. After being disarmed by some sips of alcohol, the freshman girl ends up having unwanted sex with the quarterback in the back of a truck, complete with embarrassing photos being posted on the internet the following day.

The song was released to the American country market on May 19th, but did not fare well for a number of reasons, principally that Kira Isabella’s US radio promo company HitShop Records recently realigned to focus more on satellite and streaming options because the American radio climate is so difficult to promote singles in these days. But recent headlines and current events have created a resurgence of interest in the single. With its strong female voice and perspective, “Quarterback” could very much be considered another anti “Bro-Country” addition to the country music song landscape—a precursor to Maddie & Tae’s “Girl In A Country Song” if you will. Similarly, with a slew of high-profile rape events at country concerts, including one where many concert patrons apparently stood idly by and watched and took video and photos during a rape, and another where a woman was allegedly raped by multiple men, the merging of rape and country music has become a hot topic.

“Quarterback” was not written to tackle either Bro-Country, or country music’s recent rape problem though; it was meant to tackle the rape issue plaguing the scholastic sports environment in both high school and college, and the propensity for athletic programs and universities to institutionally look the other way when allegations are levied, especially when it comes to star players. The song was originally pitched to the American market and Carrie Underwood who almost cut it, but Carrie did not want her previous relationship with Dallas Cowboys’ star quarterback Tony Romo to lead to speculation that the song was about him.

“Quarterback” has a very Carrie Underwood feel it it—solidly pop country, but still substantive, with an very emotional quotient that allows the message to resonate deep in the listener. Kira Isabella does not have the voice of Carrie Underwood, but she fits herself into the song quite nicely, and the strings and other sonic accoutrements compliment the weighty drama of the story.

The video for “Quarterback” is also an asset. It includes just enough abstraction, and just enough realism to convey the story without coming off as too dramatic or objectionably preachy or sentimental, while still giving a strong illustration to the storyline. An interesting note, there are many elements of “Quarterback” that mirror those of Taylor Swift’s “You Belong With Me”, including the leading lady being in the marching band, the leading male being the star of the football team, and the video showing shots of the marching band girl in her bedroom. Obviously, the circumstances in “Quarterback” are a little different.

Some are touting “Quarterback” as if it could be revolutionary to country music. But if the song is going to pull off a revolution, it first must be heard. And the idea of “Quarterback” making a late game rally on US country radio at this point seems slim. And it’s not necessarily because stodgy radio programmers refuse to play a song denouncing date rape, it’s because the song really doesn’t have the push behind it at the moment from a major radio promotional outfit.

Charles Aaron of Wondering Sound wrote a great piece about “Quarterback”, asking, “Is Country Radio Ready for a Song about Date Rape?”, though he also seemed to let a personal agenda pepper the article, starting off by observing, “One of the most threatening things that a woman can do these days, it seems, is report a sexual assault, or to assert that there is a pervasive sexual-assault problem, or to push for schools to address the issue of sexual assault on campus, or to start a hashtag where women can tweet about being assaulted.”

I’m not sure if that’s really the case, even in the traditionally-conservative country music world. And I’m not sure that two high-profile rape incidents at country concerts recently constitute an epidemic just yet. Of course Charles Aaron was probably using at least part hyperbole, but it seems that country music is commonly painted with a closed-minded brush when the reality of things is a much different picture. Johnny Cash had a #1 hit with “Sunday Morning Coming Down” in 1970. Loretta Lynn released “The Pill” in 1975. And Kacey Musgraves has seen a couple of songs do quite well in country music despite controversial themes, principally “Merry Go ‘Round” and “Follow Your Arrow”. Sometimes people on the outside looking into country seem surprised country fans have the mental competency to even tie their own shoes.

In fact one of the most remarkable things about “Quarterback” is how it comes across as simply a story that is resonant and in many ways universal in its ability to be recognized as an eternal theme of American society. It is about date rape specifically, but generally it is about the doors that are opened by power and fame, and the doors that are closed by obscurity, illustrated on a yearly basis by the casting of American society by high school royal court popularity contests. The controversy in Musgraves’ “Merry Go ‘Round” and “Follow Your Arrow” was much more overt. “Quarterback” conveys its message with feeling in a narrative that is hard to not feel compassion for.

The primary problem with “Quarterback” is the same problem with many modern-day country songs written by committee, which is they create non-linear scenarios for the performers of these songs to dwell in. One of the reasons the Outlaws of country music resonated so deeply back in the mid 70’s is because they understood that the songs they sung became extensions of the persona, whether that persona was true to themselves, or not.

“I know you like the jeans I’m wearing, ’cause I can tell by the way you keep staring.
There’s a place we like to go way back in the woods, everybody think’s we’re up to no good…
Don’t wanna think about it now, but my mama will be freaking out when I don’t make it home before 2 AM.
I’ll say it wouldn’t start or maybe we got stuck, I know my daddy he’ll be waiting up.
Let’s blame it on your truck.”

You get the sense that Kira Isabella is just singing the song put in front of her instead of drawing on inspiration to tell a heartfelt story. There’s nothing about her performance that would allude to this; it’s more a symptom of the country music system churning out songs through committee instead of doing their best to take a truly original human expression forged from inspiration and convey it to the wide masses. It would be a fair accusation against “Quarterback” to say that the song is simply pandering to the emotional vulnerability of the audience.

The unfortunate fact is “Quarterback” has little to no chance of being heard en masse, or even receiving any sizable radio play unless Sony somehow calls a cross-border audible and puts some promotion behind it. And who knows, with Kira’s new album coming out in a week, stranger things could happen. The story of “Quarterback” is a good one, and let’s hope it gets heard by more people. But let’s also hope that its moral doesn’t become even more poignant as this summer of seediness at mainstream country music concerts continues.