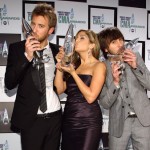 After the 2010 CMA’s some wanted to hang a “Mission Accomplished” banner for saving country music because folks like Brad Paisley and Miranda Lambert walked away with big awards while the usual cast of pop country performers got the razz. Little they know this is all theater to keep us purists from not getting to restless, and setting up Taylor Swift to sweep the awards in 2011. Right it down and remember it: Taylor Swift will sweep the 2011 CMA Awards. (The Triggerman 11-16-2010 8:20 PM CST)

But the one chink in the “Nashville returns to sanity” armor was the Single of the Year win for the highly emasculated Lady Antebellum and their dumb song “Need You Now.” What they might need now is a good lawyer, as members of the Alan Parson’s Project posse are pissed off, claiming that the chorus of the song is a clear ripoff of the creepy “Eye In The Sky.”

Here’s a statement from an affiliation of the Alan Parson’s camp, cut and pasted from Nashville Cream:

Alan Parsons has been nominated 11 times by the Grammy Committee throughout his 35 year career. He also engineered Pink Floyd, Dark Side of The Moon, as well as the Hollies, Oh Ho Ho it’s Magic by Pilot, Al Stewart and countless other artists. He even became boss of Abbey Road Studios in London.Our fans are reaching out to us by the hundreds telling us how Need you Now by Lady Antebellum is one of those “lazy rip offs” of Eye in The Sky by The Alan Parsons Project.

Here’s a mashup that illustrates the point:

Ripping off songs might be business as usual for Music Row; Gretchen Wilson was caught red handed ripping off The Black Crowes earlier this year. But never has it been for a song sporting a CMA award. If anything, the accusation proves what I’ve been saying for years: radio country these days is nothing more than rehashed classic rock.

We will keep our “Eye In The Sky” (tee hee hee) on this story and let you know what happens.