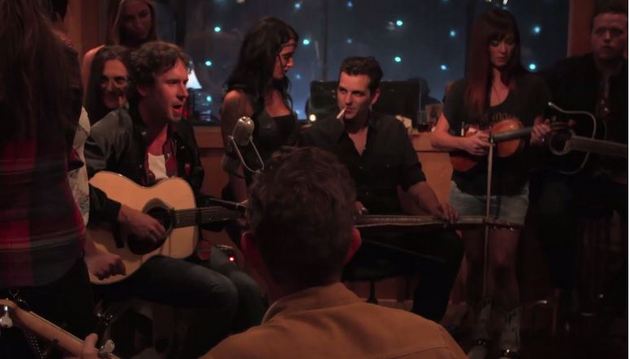 In September of 2012, Blake Judd of JuddFilms brought a camera crew to the famous Cash Cabin Studio in Hendersonville, TN to shoot a pilot episode for a television series that has never been aired. Meant to be aired late at night, similar to the late-night musical variety show The Midnight Special that was broadcast on NBC from 1972 to 1981, the idea was to take well-known established artists, worthy undiscovered musicians and songwriters, and stick them all in Johnny Cash’s legendary cabin with an open bar, and set the camera’s rolling.

Developed by Shooter Jennings and JuddFilms, Shooter Jennings’ Midnight Special had little to no rules. Pickers and songwriters organically decided what they wanted to play, and people joined in if they wished. The idea was to capture collaborative magic, while using the names of larger artists to help expose smaller ones. The names assembled in the Cash Cabin include mainstream country artists like Kellie Pickler and John Anderson, Americana names like Jason Isbell and Leroy Powell, and underground artists such as Leon Virgil Bowers (formerly Leroy Virgil of Hellbound Glory), and Col. JD Wilkes of Th’ Legendary Shack Shakers.

In the below video obtained by Saving Country Music from Judd Films, it finds Leon Virgil Bowers leading the Cash Cabin in a rendition of Garth Brooks’ “Two of a Kind.” The woman blowing in Bowers’ ear in the early portion is Leon’s wife who is known to request the song whenever she sees Leon with a guitar in his hand. Joining Leon is a stupidly-dizzying amount of music talent, including Jason Isbell, Amanda Isbell (Shires), Col. JD Wilkes, Jessica Wilkes, Scott Icenogle on bass, Rico from Hellbound Glory on slide guitar, while Shooter Jennings, Sarah Gayle Meech, John Carter Cash, Leroy Powell, Joey Allcorn, some pretty girls, and who knows else sway along and offer harmony vocals. It’s a crazy roundtable of talent, while top notch video cameras and studio-quality sound capture the entire thing.

Even more interesting is there’s apparently much more from where this video came from, with footage being captured all day, and John Anderson, Kellie Pickler, and others joining in, including Kellie doing Kitty Wells’ “It Wasn’t God Who Made Honky Tonk Angels” to be released on December 4th. No word on what ever happened to this series, but it is definitely interesting to see all this talent in one place.