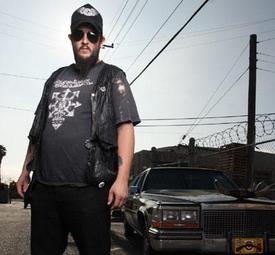 I bet when you saw Bob Wayne‘s name in the title of this article, you had some sort of immediate emotional reaction, didn’t you? You either thought, “That foul mouthed punk, I can’t even stand to see his ugly face,” and you blame him for perpetuating a perversion of country music. Or, you saw his name and said “Hell yeah,” remembering the last time you saw him live and how he rocked your face off, or how how one of his deeper, heartfelt songs helped you through a hard time.

Like him or not, Bob Wayne has arrived. One way you can tell this is by the polarization that precedes his name (just check out the comments on his last album review). In music, it’s always better that people have an opinion about you than to be ambivalent or unbeknown to your existence. Usually where there’s sharp, contrasting opinions, there’s success. Take Shooter Jennings and Hank Williams III for example. You won’t find two more polarizing, or more successful figures in underground/independent country music. But unlike Hank3 and Shooter, Bob Wayne has not had help from his given name, nor the burden of unrealistic expectations being a famous namesake can bestow.

Instead his success is a symptom of relentless touring in America and Europe; a tour schedule whose tireless nature rivals any other in music today. And one thing Bob Wayne has that country’s famous sons don’t is fantastic label support. Century Media may be way better known for metal music, but they fit in that sweet spot for present day labels: big enough to be considered a “major” with an expansive network and Rolodex, but small enough to be considered an “independent” with the ability to offer strong, healthy, catered support to each of their artists.

Though the crowds for Bob Wayne are certainly growing domestically, Europe is where he’s made his strongest foothold, like many independent country and roots artists that made the jump from amateur to professional before him. In certain Euro stops, Bob Wayne is pulling 800 capacity crowds in, just to see him, not as a support act. This is likely one of the reasons Century Media decided to put out his last album Till The Wheels Fall Off on their European imprint People Like You, an unusual move for an artist based in the States. Bob has also bought a van and a complete set of backline instruments for his band that he permanently stores in Europe to facilitate his frequent overseas tours and save on expenses.

Instead of worrying about pulling a profit or working some master plan, Bob Wayne simply put his head down and booked his own breakneck tours for years, figuring out how to include European stints in them when he could. He would work construction jobs in his home state of Oregon to get the money to buy European plane tickets for him and the band, tour the country from West to east, fly out to Europe, and then start the whole cycle over again. All of that touring led to a tight live show and a professional attitude on stage from Bob and his talent-packed “Outlaw Carnies”.

Over the years, the Outlaw Carnies have become a proving ground for underground country talent. With a loose arrangement, players are allowed to come and go as they please, but they all must provide stellar musicianship to keep up with Bob and the band’s budding legacy. Joe Buck, Andy Gibson, Donnie Herron, and Dan Infecto are just a few of the names that have contributed to Bob either live or recorded in the past, and then continued on to make bigger names for themselves. The dating duo of fiddler Liz Sloan and bassist Jared McGovern cut their teeth as Carnies, and now play with Jayke Orvis and Filthy Still among others. The entire .357 String Band once did a stint as Bob’s backing band.

The newest edition is Lucy B. Cochran on fiddle. At first glimpse you might mistake her for Liz Sloan who she replaced, but the two female fiddles have very different styles. Lucy goes to the bluegrass shuffle like few fiddlers I’ve seen, and adds a more countrified element to the Carnies. The current Carnies also feature “Elmer” on standup bass, and Ryan Clackner who can serve up some of the hottest leads licks on Telecaster that you can find. Bob’s current lineup is as sharp as any you will find in underground country, and so is Bob’s show…that is of course if Bob Wayne is your thing. If it’s not, then he could resurrect Bill Monroe’s Bluegrass Boys to back him up and it still wouldn’t be enough.

It’s the swear-filled lyrics and racy themes in many of his songs that will always keep Bob at odds with many country faithful, and understandably so. They will also unfortunately keep those same people from enjoying many of his deeper songs that don’t feature racy topics or bad language.

The cold, hard fact is many favorite underground country bands may never be able to make the leap from being amateur, underpaid musicians, to professionals making a reasonable, living wage, despite the quality of their music or their desire or ability. But Bob Wayne has, and with continued label support, creative freedom, a stellar backing band, and a bottomless pit of energy and enthusiasm for touring, he also seems to have plenty of upside potential.

Bob Wayne is playing the Muddy Roots Festival on Friday 8/31 at 11 PM on Stage 2.