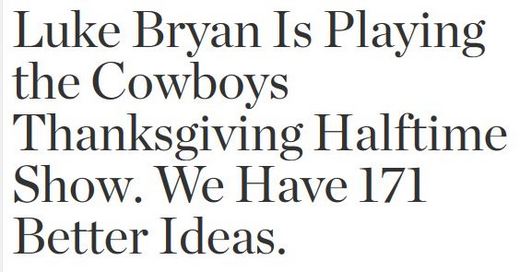 This is the mantra repeated over and over to folks who complain about the poor efforts expended by many of mainstream country music’s biggest stars. The problem is, sometimes you don’t have a choice. Sometimes, the music finds you.

There you are, taking in Thanksgiving festivities with friends and family, proudly wearing an “I â™¥ Country Music” T-shirt (figuratively, at least), and celebrating one of America’s high holidays with a nice football game, and who comes on the television acting as country music’s ambassador to the rest of the world but Luke Bryan, up there ordering all the country girls to “shake it for the crickets and the critters and the squirrels.” And now you’re forced to explain to your second cousin and 78-year-old Nana that no, you don’t love that kind of country music.

It’s no Super Bowl, but the launching of the Salvation Army’s Red Kettle drive every year during the halftime of the Dallas Cowboys game is a tradition nonetheless . . . and so is every time country music gets a chance on a national stage, it results in a general embarrassment, and a bad representation of the talents and spirit and style of what country music is all about. 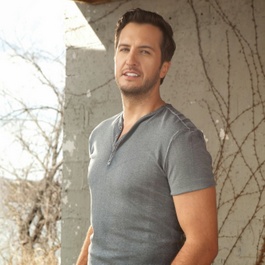 Luke Bryan’s performance wasn’t especially pitchy, or exceptionally awful for any particularly reason. It was your average Luke Bryan show where it was much more about his hip shaking than anything else. But the songs he selected were some the most vociferously objectifying to the female condition in his arsenal, and in no way appropriate to the mood of Thanksgiving festivities. He does have some songs that would be age appropriate for family time, but definitely not “Country Girl (Shake It For Me),” “Kick The Dust Up,” or “Don’t Want This Night To End.”

Luke Bryan can embarrass himself all he wants, but there he is representing “country” music to people who otherwise pay scant attention to such things.

But I don’t blame Luke Bryan for his performance on Thanksgiving. The Dallas Cowboys hired Luke Bryan, and Luke Bryan is exactly who they got.

Earlier in the week during the incredibly-spare American Music Awards, country’s terrible EDM representative Sam Hunt won New Artist of the Year. “I’m proud to represent country music tonight,” Sam said during his acceptance speech, but as we all know, Sam Hunt does no such thing. Nothing about Sam Hunt’s music in any way resembles country. But how is your average American Music Awards viewer going to know that? Sam Hunt says it as he’s accepting some award for being the best in a given category, and the audience buys in.

The sports realm gets especially pounded by the worst modern country music has to offer. Intros to football games, the bumper music in between commercial breaks, it’s all the most terrible super hits of the Bro-Country era. That’s why we’ve seen so much vitriol for modern country music from sports media in recent years. The Ticket radio station in Dallas, and specifically their Hardline show regularly lampoons modern country. Just this week, Deadspin‘s The Concourse wrote an extended piece called, “God Bless Alan Jackson, Country Music’s Invaluable Extra-Vanilla Everyman.” Country media can’t publish these type of involved pieces—they’d be ignored. It falls to sports media to question what is happening in country, to look back for better examples of the genre, and to pontificate on what the future might hold.

The simple fact is that many people in America really don’t like country music. Luke Bryan may be hyper-popular with a narrow demographic of folks, so much so that he can sell out stadiums in certain locales no problem. But if you surveyed America (which anecdotally is sort of what happened on Thanksgiving), you find tremendous blowback for his music.

Last week Pandora released its 2015 “Top Thumb Hundred“—or the 100 most thumbed up songs on the format for the entire year. You would think that as country music’s most popular star at the moment, and the reigning CMA Entertainer of the Year, Luke Bryan would have one or two selections on the list. You also might expect to find Sam Hunt on there, since he crosses over so well just like Luke. But how many country songs of any sort made it into Pandora’s Top Thumb Hundred for 2015? Zero. Zilch. Nada. Not a single one. The only song that could even close is curiously Lynyrd Skynyrd’s “Sweet Home Alabama” that came in at #75.

Of course the Pandora list isn’t scientific. Neither are the “thumbs up/thumbs down” ratings on YouTube, or any of the other crowdsourced measurements on positive/negative sentiment about music. But consistently, country music, whenever presented to the general population, tends to reveal itself as extremely polarizing, if not problematic.

With a few exceptions. When America tuned into the 2015 CMA Awards on November 4th to see Justin Timberlake perform, they pretty resoundingly approved of what they saw from Chris Stapleton too, and voted with their dollars in a way we haven’t seen before in the modern country music era, to the point where Stapleton is now trumping Luke Bryan in the charts. There are country artists that can build consensus. They’re just still on getting the big opportunities. And only when they start to can we begin to broach the subject of country music being saved.