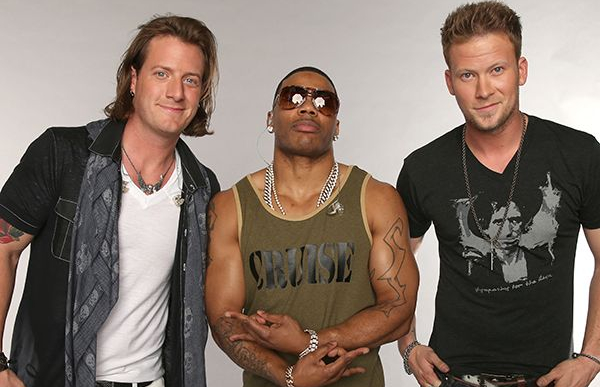 Rapper and hip-hop artist Nelly was arrested Saturday morning (10-7) in Auburn, Washington after he was accused of sexual assault by a local woman while on tour with country duo Florida Georgia Line. Nelly, whose real name is Cornell Iral Haynes Jr., was arrested on his tour bus in a Wal-Mart parking lot where the alleged rape occurred. Auburn is a suburb of the Seattle area where the rapper performed at the White River Amphitheatre in Auburn Friday night with Florida Georgia Line as part of their current “Smooth Tour.”

According to Auburn police spokesman Commander Steve Stocker, the woman called 911 and reported the rape at 3:48 a.m. early Saturday. After an investigation, police decided to charge Nelly, and eventually took him into custody on 2nd degree rape charges.

According to Nelly’s attorney Scott Rosenblum, the accusation is a complete fabrication. “Our initial investigation clearly establishes this allegation is devoid of credibility and is motivated by greed and vindictiveness,” Rosenblum said in a statement. “I am confident, once this scurrilous accusation is thoroughly investigated, there will be no charges. Nelly is prepared to address and pursue all legal avenues to redress any damage caused by this clearly false allegation.”

Nelly was scheduled to perform with Florida Georgia Line Saturday evening in Ridgefield, Washington, just north of Portland at the Sunlight Supply Amphitheater. Along with his own hits such as “My Place” and “Over and Over,” Nelly has collaborated with numerous country artists, most notably when he appeared on a remix of Florida Georgia Line’s mega hit “Cruise,” which helped make the song the longest-charting single in country music history at the time. Nelly also collaborated with Tim McGraw on the song “Over and Over” in 2004.

Nelly’s manager also announced in April of 2015 that the rapper would be releasing a country music EP called Heartland at some point, though no date has been set for the project. Also in April of 2015, Nelly was arrested when his tour bus was pulled over in Putnam County, Tennessee for not having proper tags. Numerous weapons and narcotics were discovered on the bus in a police search. Five “rocks” of methamphetamine, a small amount of marijuana, a gold-plated .50-caliber Desert Eagle pistol, a .45-caliber Tarus pistol and a .500-magnum Smith and Wesson were all confiscated. One of the people in Nelly’s posse in possession of one of the guns and was also a convicted felon. Nelly himself was charged with felony possession of narcotics, and booked into jail.

UPDATE 10/7 9:00 CDT: Nelly has been released from police custody, and in a series of tweets has said,

Let me say that I am beyond shocked that I have been targeted with this false allegation. I am completely innocent. I am confident that once the facts are looked at , it will be very clear that I am the victim of a false allegation. I do want to apologize to my loved ones for the embarrassment and for putting myself in a situation where I could be victimized by this false and defaming allegation.

I also want to thank my fans for their unwavering support. They know me. I assure you I will be vindicated. And I assure you, I will pursue every legal option to address this defaming claim. Thank you. In other words y’all know damm well I ain’t do no dumm S^*t like this..!! Love ..!!!! To be absolutely clear. I have not been charged with a crime therefore no bail was required. I was released , pending further investigation.