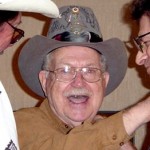 Ralph Mooney was the best steel guitar player ever. Period. End of story. And anybody who disagrees with me, I will come to where you are and personally kick your ass.

And beyond the steel guitar, he was one of the most important and most influential musicians in country music history. Top 5. Maybe even top 3. Hell, right now I can’t even think of one I would put above him. Bill Monroe, Lester Flatt, Earl Scruggs? Yeah, I would include him in that company. You might be able to find some that could move their fingers faster, but nobody had more taste, more soul than Ralph Mooney. Ralph Mooney is the reason when those strings ring out, it reminds you of the past, it tugs at your heart, it awakens something deep inside of you that seems forgotten but totally familiar all at the same time. Ralph Mooney is responsible for the sound we all call “country music.” It is simple as that.

More specifically Ralph Mooney was the man responsible for the “sound” of early Merle Haggard, of heyday Waylon Jennings, and just last year for the great steel guitar work on Marty Stuart’s award-winning Ghost Train: The Studio B Sessions, which included a song Ralph Mooney wrote himself, “Crazy Arms”. If it wasn’t for Ralph Mooney, country music would be something very different than we consider it today, if it even still existed. You can find a dozen big-named country stars with a dozen or more #1 hits that could not even come close to being as important or influential to country music as Ralph Mooney.

And all this from a man who doesn’t even have a Wikipedia page to add a deceased date to.

Ralph Mooney is the exact reason that we should never forget the sidemen, not just the songwriters; the musicians, not just the mega-stars; the men and women that actually make the music that we all love. And above all, with 20 years under his belt with Waylon Jennings, and a man that always created the trends, and never conformed to them, Ralph Mooney was red-blooded, deep in the trenches country music Outlaw that fought for purity with both hands.

My heart hurts, my soul wrenches at the news of his passing, but at the same time my blood boils and my passion mounts with the knowledge that Ralph’s story is beyond untold, and his legacy grossly under-appreciated. The fire that breeds in me is the whole reason I don the yoke of Saving Country Music every day.

Ralph Mooney’s strings ring eternal with the most infinite beauty, his life’s work reverberates in our souls with zero diminish till kingdom come. When our society downfalls from selfishness, over-consumptive hedonism, and a wanton unappreciation of art, and the archeologists of the future sift through our ashes to find something, anything worth preserving and paying forward, they will find the sound of Ralph Mooney’s steel guitar, and make sure it is heard by the future to stir the souls of mankind forever.