Singing Sisters Help to Save Country Music with Harmony 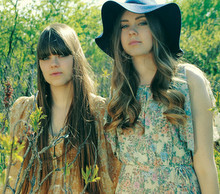 Whenever I find myself thirsting for inspiration, I tend to search out the blessed gift that is the harmonies of sister pairings. Any two great singers can harmonize, but few can match the instinct and tone of two blood relatives, making the artform seem as effortless as breath. From The Carter Family to The Louvin Brothers, harmony is one of the most indelible foundations of country and roots music, and will always be relevant to the audio palette no matter what the trends of popular music are.

Following is a list of singing sisters who never cease to inspire.

Sisters Sarah and Savannah Church from the coal mining region of Dickerson County, Virginia bring some of the most exquisite harmonies to their love for traditional country and gospel music. The fraternal twins are regularly joined by their brother Seth Church on lead guitar, and have all the potential in the world, whether they decide to stay performing more traditional material, or try and branch out into original compositions. Ain’t no Auto-tune here folks! Just simple, God-given talent.

It borders on being criminally negligent that Paige Anderson has yet to be presented with a broader audience. But it will happen, and when it does, you can bet sister Aimee will not be far behind. And neither will younger brother Ethan, and youngest sister Daisy, who’ve all been performing in the Anderson Family Bluegrass band for years. Impeccable harmonies flow from this family, yet Paige’s greatest attributes may be her flat-picking guitar and burgeoning songwriting, bolstered by sister Amiee’s sweet fiddle and accompanying voice.

Sisters Laura and Lydia Rogers from Muscle Shoals, AL are signed to Universal Republic and had the prestigious T Bone Burnett executive produce their debut album. With they opportunities they’ve been bestowed, they’re able to bring beautiful harmonies and a neotraditional sound to a much wider audience.

From Sweden, these two talented sisters are turning the world onto the beauty of Americana music when it is mixed with the roots of traditional country. First Aid Kit’s voices rise like few I’ve ever heard, and their songwriting challenges the best composers on any continent. No better example of how roots music can progress while still preserving its roots than First Aid Kit.

Don’t say that Western Swing is dead! One listen to The Quebe Sisters (pronounced Kway-bee) from Texas and you’ll see that Western Swing is safe in the hands of an up-and-coming crop of sincere, authentic, and talented young artists. Over the years the Quebe’s have showcased their savvy on The Marty Stuart Show, The Grand Ole Opry, been on tour with Asleep At The Wheel, and have appeared on stage with Merle Haggard and Ricky Skaggs to name a few. As soon as their voices crack the air, you’re immediately transported back to a time when the heart and soul of country music was alive and pure.

Other singing sister groups: The Staves, The Shook Twins…