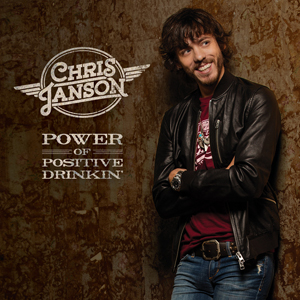 It’s nauseating enough when horrifically average people are given extraordinary opportunities. It’s even worse when extraordinarily below average people do things that are horrifically opportunistic. This is what you have with much of today’s popular country music, and specifically with Chris Janson and his stupid new single “Power of Positive Drinkin'”—an ecstatically formulaic and dreadful affair that crosses the lines of creative decency, defines hypocrisy at its very root, and relies on a lyrical hook coined by Lou Reed six years before Chris Janson was even conceived.

Why on God’s creation we are still being pummeled over the head with this 2012-style Bro-Country cess is beyond me, but since Chris Jason knows no other form of expression than to regurgitate clichÃ©s, and his Bobby Bones-induced hit “Buy Me A Boat” is finally falling in the charts, it’s time to release a new song. And what else is he to do except fall back on monotone white boy rapping, record scratches, and only one verse (which really is just a second chorus) which lasts all of 16 seconds.

Yeah I understand that even doltish man children need something to listen to, but the lunacy of having someone perform a song whose basis is the phrase “I believe in the power of positive drinkin'” when he himself is in fact a publicly-pronounced person of sobriety takes the sometimes tedious discussion of authenticity in modern music and sends it into hyper drive. We’re not talking about some drunk turned sober singing about the ills of alcohol. We’re talking about a performer singing about joyfully imbibing in a substance he’s completely sworn off on sheer principle.

Hey, hats off to Janson for his personal choice and the discipline to stick to it. Hell maybe there’s a story there. Maybe Chris Janson learned a life lesson through his alcohol use and eventual sobriety, and it would make for a great country song. But instead he decides to buck all that for the big payday with this boisterous piece of party hardy bullshit.

But believe it or not ladies and gentlemen, just like in much of terrible art, there’s an unintended beauty in the way it unfolds with such conviction to its awfulness, and such lack of awareness to its purpose. Cult icon and incredibly influential songwriter and performer Lou Reed once wrote a song with his keys player Michael Fonfara called, lo and behold, “Power of Positive Drinking.” Nobody’s accusing Chis Janson of ripping off Reed (though it is still a tasteless move), but listening to Reed’s song from 1980 underscores just how far we’ve slid in music entertainment in the last 35 years.

Where Chris Janson and co-songwriters Chris DuBois and Mark Irwin tried to make the “Positive Drinkin” idea into an arena rock party anthem, Reed recognized how the phrase was inherently stupid, and made a stupid song with stupid lyrics to illustrate this point. It was almost like Lou Reed was trolling Chris Janson.

But what’s even more interesting about the Lou Reed version is it was released on his record Growing Up In Public, which is seen as a transitional work in his career. Hardcore Reed fans recognize Growing Up In Public as the moment when Reed’s music matured (as the title implies), and took a very personal turn. “Power of Positive Drinking” was the outlier on the album because of its stupid nature, but Reed was expressing himself all the same. It was in the aftermath of Growing Up In Public and “Power of Positive Drinking” that Lou Reed kicked alcohol and drugs himself, started exercising, and by all accounts, blossomed not just as an artist, but as a person.

Music is supposed to be about expression. “Positive Drinkin'” is all about reinforcing corporate America’s version of fun and success through the propagation and promotion of mass consumption. Chris Janson’s “Buy Me A Boat” is another excellent example of this.

A song like this from any other performer is just another stupid Bro-Country song. But from Chris Janson, it is like cultural poison.