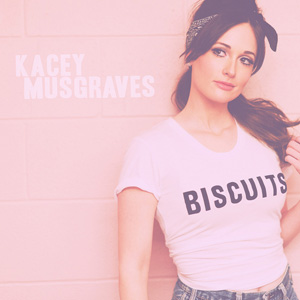 And the Kacey Musgraves dichotomy continues…

Yes, she’s the mainstream country star who isn’t afraid to actually act and sing a little country, is fearless enough to actually have the audacity to say something with her music, and has found a way to be decorated by critics while still upholding enough of a commercial standard to be recognized by the CMA’s and ACM’s. But despite all your squinting to make Kacey Musgraves into what you want her to be, she invariably seems to fall just a little short, no matter what your perspective is.

Yes, this new single scheduled to be released on March 16th is country. And it’s kind of kitschy and cool, and cute in how it works. But take the structure and pentameter of Kacey’s much-decorated “Follow Your Arrow,” and the thematic formula of “The Trailer Song,” and viola, you pretty much have “Biscuits.”

It’s not that “Biscuits” is bad. Judging it in a vacuum, to hear a song like this on country radio would be welcomed, despite whatever poor first impressions some listeners might have. But do we really expect “Biscuits” to do well on radio? Variety is the spice of life, and Musgraves just doesn’t evidence enough of it here to get your motor running.

The first time you see the magician saw the lady in half your mind might be blown away. But if you see it enough, eventually you’ll start to yawn. “Biscuits” was written by the same Musgraves / Shane McAnally / Brandy Clark troika that we’ve seen in action now on numerous singles. All three are considered highly-lauded songwriters (McAnally’s intimate involvement with the Sam Hunt experiment notwithstanding), yet they all three can be fairly criticized for heavily leaning on a formulaic approach.

This is very curious material for a lead single from Kacey’s upcoming album, though a little bit bold at the same time. I’m convinced that a serious portion of country music’s female problem revolves around the selection of singles, and the choice of “Biscuits” plays right into that postulate. Music Row’s taste makers just don’t know what to do with women. ‘Biscuits” would be much better as a mood-shifting album cut right after a moving ballad, not the first impression listeners are going to get about a new record. The “Mind your own biscuits, then life will be gravy,” hook works a few times, but quickly becomes forgettable. This song just feels superfluous.

And why is the country music media focusing its attention on this song some two weeks out from its release, and before the general population even has a chance to hear the studio version? We got 11 more days to scratch off the calendar before it’s released, yet Saving Country Music is bringing up the caboose when it comes to voicing an opinion. Soon we’ll need spoiler alerts for our favorite artists’ singles.

A live version, because the studio one keeps getting yanked. Because you know, it’s not out yet.