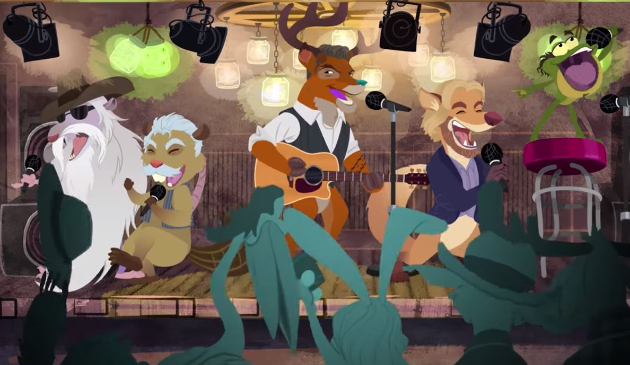 I would tell Blake Shelton to get off my lawn, but he’s older than me, which begs the question why a 41-year-old man is releasing a corny-ass country song that relies on a sexual innuendo for its entertainment value, and is accompanied by a cartoon video?

What is it that compels country music artists releasing sexually suggestive songs to use elements of children’s entertainment as the visual component? Trace Adkins did the same dumb thing a while back. He must have been on a drunk when he decided to employ puppets to interpret the sex scenes in his imbecilic “Brown Chicken Brown Cow” because he didn’t want the kids (which is who the immature song appeals to) to see anything inappropriate. That’s like saying, “Oh, we don’t want our tobacco products to appeal to minors, so let’s make our mascot Joe Camel.”

What sucks about “Doing It To Country Songs” is that there’s actually a lot of positives going on here, and it could have turned out to be something decent. First, it’s actually a country song, with prominent dobro and fiddle, and a smooth, half time beat that really makes you feel the mood the song aspires for. It actually fits Blake Shelton’s voice well, and add on top of that the presence of the immortal and sainted Oak Ridge Boys as backup singers, and on the surface you have all the right ingredients to mint pure country music gold. Paul Overstreet was even involved in the writing, along with Marty Dodson and Jacob Lyda.

But the innuendo here is worn out in the first 30 seconds, and the double entendres just don’t have the potency or levity to land a punch or crack a smile. “Doing It To Country Songs” is a throwaway track at best, which begs the question why Blake Shelton and his label were compelled to highlight it like this. It’s a song that works best as a lighthearted moment in the middle of an album that makes you chuckle, and then you move on. It earns Blake a few brownie points for recording something that actually sounds country, while mostly being harmless fun. Let’s not get too uptight here just because it’s easy for traditional country fans to hate on Blake Shelton for his Old Farts and Jackasses comments.

But you put an animated video out for this song, name your tour the “Doing It To Country Songs Tour,” make this an earworm for my 6-year-old niece where she’s singing the hook with her friends in kindergarten, and all of a sudden you’re giving me ample excuses to hate this thing and feign moral outrage. I’m not half as mad about this song as I am for feeling like an uptight prick ruining everyone’s good time by wanting to hate on it. This song was best left as an album cut, and in the shadows.

Didn’t Music Row learn anything from the puppet sex of “Brown Chicken Brown Cow”? The mainstream career of Trace Adkins hasn’t recovered since…

…actually shit, what am I complaining about? Knock yourself out Blake Shelton!

(Leave your comments about the double standard with Wheeler Walker Jr. below.)