The Erosion of Taylor Swift as a Role Model – UPDATED 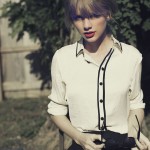 This story has been updated (at bottom).

For years as a reactionary Taylor Swift hater, one of the main arguments that was made against my stance was that Taylor Swift was a good role model. My rebuttal was that being a role model was not a sonic element, so it could in no way refract the fact that Taylor Swift wasn’t country, and couldn’t sing. And by the way, is it too much to ask that our role models at least be able to fulfill their roles in whatever discipline they’re endeavoring in to even some average level of competency? Isn’t that what a role model is, someone who inspires us by exemplifying the extreme of human abilities while not losing sight of themselves and how the world perceives them? For gosh sakes, Taylor Swift couldn’t even sing.

Where the Taylor Swift role model identity was realized for me was in her 3rd album Speak Now. Maybe an average effort of music, but for a pop album in a world of mediocrity, average immediately becomes exceptional. And hey, Taylor Swift wrote all of those songs, by herself, and produced the thing too. At 19, she was calling the shots. She was separating herself from the common pop cycle of becoming product. This my friends was inspiring and exceptional to say the least. And this all transpired in a period of renewed attention to her vocal limitations and some honest progress in that direction, paralleled by underwhelming, nondescript relationship news in her personal life. After her 2010 Grammy fiasco, Taylor Swift had righted the ship, and made her critics eat their words. Including this one.

But there’s a reason the most successful among us are the few, and why there seems to be celebrities and role models falling from grace on any given day. Human nature is so starkly cyclical, and success so many times breeds overconfidence and the blinding to oneself. Speak Now was yet another wildly-successful album for Taylor, but apparently it wasn’t enough. Sales could have been a little better, and radio could have been a little more lucrative. That’s the problem with money–you can always have more of it.

So the formula that had propelled Taylor Swift to one of the most successful, if not the most successful musical act of our generation, needed to be revised. The small, but effective team of Taylor, producer Nathan Chapman, and for Taylor’s earlier albums, co-writer Liz Rose, was scrapped for a dream team of 8 producers and co-writers, including ultrapop moguls Max Martin and Shellback. And the need to do this was not deemed by Taylor herself focusing inward, but by her label president Scott Borchetta. But hey, it’s really only 3 songs Swift is being asked to sign on to that weren’t her original ideas. That’s mostly harmless, right?

Next thing we know Taylor Swift’s public persona is being completely re-shaped and blotted by these 3 songs and how they sully what originally made Taylor Swift ferociously appealing to the masses: being herself, writing and performing her own songs. Yes, those Max Martin / Shellback songs were only 3 out of the 16 tracks on Red, but they constituted 2 of the first 3 singles. And word is, the 4th single will be the last Max Martin / Shellback song “22,” once again a song that resides out of her nature, beyond her vocal abilities, and completely out of her character.

Oh, and Taylor Swift is already in the studio again recording. What do we think she’s learned from the commercial success of the songs primarily written by others? I doubt they’ve taught her how to better be herself. I wouldn’t be surprised if many of Red‘s substantive songs are left on the shelf, and new Taylor Swift dance pop material is made available to the public quicker than anticipated. 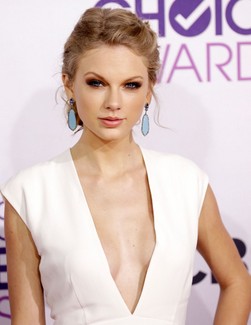 This feels like a tragedy. Sure, a first world tragedy, but nonetheless. I find myself resisting the urge to hatch a plan of how to reach Taylor Swift and tell her that the success of these ultrapop songs is fool’s gold. I hear you can sometimes catch her going to get coffee from her suite in Nashville when she’s in town. On second thought, this feels like a plan of how to get tazed.

Whether it was from gross overconfidence, serious self-doubt, or bad counsel from her confidants, Taylor Swift fell during her Red album project like the neckline on her People’s Choice Awards dress (I’m told “falling neckline” is how that style is described). But how is she supposed to realize this? She’s surrounded by #1 hits and overwhelming financial success. Look, I’m no prude. However that dress was wickedly symbolic.

In an interview on 60 Minutes last year, Taylor Swift said, “I definitely think about a million people when I’m getting dressed in the morning”¦It would be really easy to say, ‘I’m 21 now, I do what I want, you raise your kids.’ But that’s not the truth of it. The truth of it is that every singer out there with songs on the radio is raising the next generation.”

But when she got dressed for the People’s Choice Awards, Taylor Swift only thought about one person. And are we surprised with all of this loss of self identity that Taylor Swift bombed her New Year’s performance, reversing years of work to erase her pitchy past? Or that all of a sudden and out of character Taylor Swift starts hop scotching from one torrid love affair to another, not just making surface scratches to her grounded, good girl luster, but removing large chunks? The question is not if Taylor’s now old enough to dress more scantily or to be more promiscuous. The question is does she want to continue to be perceived as a role model or not?

I don’t give a shit how many people Taylor Swift dates, who they are, or how long she’s with them. It’s none of our damn business, and if you think that Taylor’s dating practices are any different than most 23-year-old young women, you’re a fool. Yes, the stock of men she gets to choose from gives new meaning to the term “the world is your oyster.” But possessed with the same opportunities, we would all take them, and make similar, shallow mistakes. That’s not the point here.

The point is Taylor Swift is exhibiting all the classic signs of losing herself, and through that, America is losing one of its most important role models. And if being a role model is the metric that allows us to overlook some of the otherwise compromising elements of her music, we’re losing one of America’s greatest musical performers too. America has never had a positive pop role model like Taylor Swift. And America has never needed a positive female role model more than now.

Taylor Swift taught millions of little girls that you can be exceptional even when you’re average, and that you achieve this by being yourself. This is the lesson that hangs in the balance.

In fairness, some are also alleging that Taylor is actually saying, “Sorry for my arm,” or “Sorry, that’s my arm,” as she pulls her arm out from behind pop star Selena Gomez.