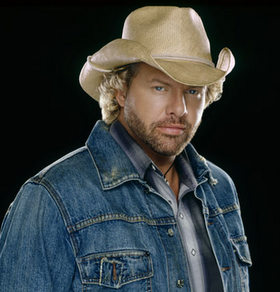 Every year near the end of June, Forbes posts its list of the world’s highest-paid celebrities. And when it comes to the realm of country music, Toby Keith has been the perennial king of the hill in recent memory. Even as his career has declined from his high-flying heyday in the oughts, as the owner of his own Show Dog label, and as one of the original investors in Scott Borchetta’s now massive Big Machine Label Group, Toby Keith gets paid big even if his own records aren’t selling. Every time Taylor Swift and Florida Georgia Line sell a record, Toby receives a little nugget, and he would even annually top Taylor Swift when it came to the Forbes’ rankings.

But times have changed, and so has the situation surrounding Toby Keith and his label. Let’s not kid ourselves, Toby Keith is still doing just fine. At an annual salary of $53 million, he’s still a major powerhouse. But now Toby Keith is only #32 on the Forbes list, and not only is Taylor Swift smoking him at #8 with $80 million banked, but the recently-unretired Garth Brooks comes in at #6 with $90 million. Toby Keith lost $12 million in salary in the last year. Meanwhile in the years prior, his income has stayed mostly stable.

But that only tells part of the story.

On July 2nd, it was announced that the Big Machine Label Group had re-signed a distribution deal with Universal, and in the deal, Big Machine has acquired full ownership of the imprint Republic Nashville. Previously, reports had Scott Borchetta attempting to sell Big Machine to larger labels, but Borchetta’s evaluation of the label’s value and the value assigned to it by potential suitors was too far off. Also, Borchetta was insisting if he sold to a major, that he would become the heir apparent CEO. Borchetta also looked at selling to non label entities like iHeartMedia and Snapchat before deciding to stay put.

When Toby Keith and Scott Borchetta parted ways in 2005 to start their own respective labels, they both were in the fledgling stages. Since then, Borchetta has built Big Machine into a monolith of music with five separate labels groups, each with five or more artists: Big Machine, Valory, Dot, Nash Icon, and now Republic Nashville under sole ownership. And where is Toby Keith’s Show Dog? Struggling to even keep five artists signed. Bigger names like Randy Houser, Joe Nichols and Trace Adkins have left, and their future star Josh Thompson has yet to significantly develop. Right now the Show Dog roster only has four names, and that includes Toby Keith himself, his daughter Krystal Keith, and a new band named Native Run along with Josh Thompson.

In November of 2014, Universal Music Group announced a restructuring of Toby Keith’s Show Dog Universal, and as part of the deal, announced that Keith’s latest record 35 MPH Town would be release in the “spring of 2015.” Obviously the spring of 2015 has come and passed, and not only do we not have the new Toby Keith record, we don’t even have a release date yet. With the lead time needed before an album can be released properly, it’s unlikely we’ll see the new album until the fall at the earliest, and maybe longer. What’s the delay? And why announce a spring release if you can meet it, or can’t even come close? Meanwhile the latest Toby Keith single “35 MPH Town” has completely stalled at radio, peaking at #51 on the Billboard Country Airplay chart.

But possibly the most troubling sign that something is not right in the Toby Keith camp is the continued stories about strange closings and other curious issues surrounding the “Toby Keith’s I Love This Bar & Grill” restaurant chain. Keith founded the restaurants in 2005, and they are operated out of Phoenix by Boomtown Entertainment. Over the last 18 months, the franchise has been going through what they characterize as “tactical” restructuring, but the strange stories have yet to stop, and have dramatically accelerated over the past couple of months.

“Unfortunately my manager received a call this morning that Toby Keith’s I Love This Bar Orlando has closed it’s doors unexpectedly,” said country artist Grayson Rogers to fans right before the 4th of July weekend. “We have been unable to reach the corporate office so we do not know the reasoning behind the closure. We are terribly sorry for those who were planning to travel to Orlando this weekend for the shows.”

What’s even more strange about the unexpected closing is that the Orlando location was just opened in December of 2014, and was supposed to be replacing other under-performing locations as part of the restaurant chain’s new strategy. The closing was very abrupt, and left many employees and scheduled performers in a lurch.

Ten locations of Toby Keith’s I Love This Bar & Grill have closed total, an each one under similarly abrupt circumstances.

” The Tucson, Arizona location closed on March 7th, 2014 after being evicted from their property for breach of contract.

” The Newport News, Virgina location closed on January 1st, 2015 after being evicted from the property and reportedly owing $554,000 in rent and fees.

” The Savannah, Georgia location scheduled to open in August of 2014 never did, and the franchise was served an eviction notice for the space in the Savannah Mall on April 7th, 2015.

” The Syracuse, New York location closed abruptly on May 17th, 2015 reportedly because of unpaid rent.

” The Orange Beach, Alabama location was closed on June 3rd, 2015 after being evicted from the property.

Six of the ten closings have all occurred since May (roughly when Toby Keith’s latest album was supposed to come out), and the closings have accelerated over the last few weeks. Granted, Toby Keith appears to have little direct daily involvement in the operations of the restaurant chain at this point, but it is his name emboldened on the front of each shuttered store, and he is the founder.

The issues facing Toby Keith’s restaurants seem somewhat symbolic of the ending of an era for one of country music’s most successful franchises in recent memory. Just as the fern bar concept has fallen behind the times in American culture recently, so possibly has Toby Keith.

The singer has undoubtedly amassed a war chest of resources during his historic, and likely Hall of Fame run in country music. But with the lack of upper-tier commercial talent at his label, a stalled album and single of his own, and serious issues with the restaurant franchise that bears his name, we could be on the brink of one of the hardest falls we’ve seen from a major country music star in quite some time.