Trace Adkins: “I Went to That Well One Too Many Times”

Trigger Down with Pop Country 42 Comments 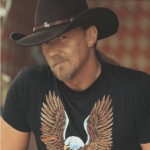 The fallout continues from Trace Adkins’ stupid song “Brown Chicken, Brown Cow”, as he continues to try to lump blame on others for the song’s unpopularity, though finally admitting to some culpability himself. Despite CMT reporting that Trace used an appearance at the Country Radio Seminar to “apologize profusely to the radio crowd,” Trace is now telling The Boot he’s “Not Sorry”, but that…

“I apologized for asking some ultra-conservative radio stations to play it. I should have known better than that. I’m the first one to stand up here and admit that I don’t always pick the right singles but, hey, [radio doesn’t] help very much. I’ve never had radio collectively come to me and say, ‘Oh, my God. Please release this song.’ Ya know, why? Because they don’t listen to albums anymore. That’s why.”

Yes ladies and gentleman, even Trace Adkins is now complaining about the short-sightedness of country radio. And Trace Adkins and his fans continue to misunderstand that the backlash for “Brown Chicken, Brown Cow” has little to do with “ultra-conservative” morality, beyond maybe it targeting kids. The criticism is more about decency from an artistic standpoint; that the song blatantly preys on the insipid nature of mass consumers, and it does so in such a transparent way, this likely lent to its lack of success. It was also too similar to Trace’s “Honky Tonk Bandonka Donk”, which even Trace is is now admitting.

“I guess I went to that well one too many times. They’re over it. it’s like if I was a painter. I was painting landscapes and I couldn’t sell any of them, then one day I decided to paint a bowl of fruit and someone walks in my studio and immediately buys it. Then I start painting more bowls of fruit, and they’re selling great for a while and I stop painting landscapes. Then someone comes in and says, ‘Got any landscapes?’ ‘No, I quit doing those.’ ‘Well, I want those now.’ ‘Oh.”