In 1999, a true underground in country music was coming into form. Neo-traditionalists and country punks moved into lower Broadway in Nashville, revitalizing the area and establishing a home base for young, like-minded musicians offering up an alternative to whatever was going on a mile away on Music Row. BR549‘s residency at Robert’s Western World was in full swing, and Layla’s Bluegrass Inn was up and running with bands like Th’ Legendary Shack Shakers and Hillbilly Casino.

Then the grandson of Hank Williams put out a debut album with a neo-traditional style that featured three songs from an Austin, TX artist named Wayne “The Train” Hancock, taking the country music underground transcontinental. Along with Dale Watson, another superb Austin, TX performer, this three-headed monster started rattling the cage of the country music world, gnashing their teeth at Nashville and name dropping each other in songs and on stage.

Amongst all the bustle and big names in 1999, another superlative Austin talent released a debut album a little more quietly. The idea that there’s an amazing, world-class music talent on every corner of Austin, TX is not a myth, and Roger Wallace is a testament to that. But what many of Austin’s legendary local artists don’t have that Roger Wallace does is that one album, that one work that stands out from the crowd and withstands the test of time. 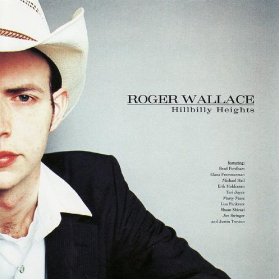 Named for the semi-famous Austin apartment complex he was living in at the time, Hillbilly Heights is a timeless treasure of country music. This album could be put out today, or in 1975, and its music would still sound just as fresh and engaging and speak to everyday lives as it did in 1999. If space aliens came down and asked me to choose one album that represented country music, after shitting myself from the shock of being accosted by aliens, I very well may hand them over a copy of Hillbilly Heights, worried that a Hank Williams album from the 50’s may be too classic for their taste, or a more modern album too pop.

But like so many of these Austin country music stars, self-promotion and the world outside of the Austin corridor is an afterthought with Roger, and that is how Hillbilly Heights and Roger have remained obscure to so many outside of Texas. A check of Roger’s website shows he hasn’t updated his show dates since George W. has his legs propped up in Oval Office. Austin becomes so comfortable for many musicians, it’s hard for them to leave or focus their energy elsewhere.

Hillbilly Heights is an album of instant classics. Populated with 9 Wallace originals and a smart batch of covers, it never slips up, never reveals a bad moment, it just keeps giving pure classic country gold. The formula for making good classic country these days is to get it to sound like the old stuff, yet to bring fresh themes and approaches to the songs. That’s easier said than done, but exactly what Roger Wallace does, like with the song “Don’t Nobody Love Me (Like My Baby)” that starts out as a good love song, but then reveals itself to be an even greater murder ballad.

I wouldn’t call Roger’s voice “big”, but what do all the ladies tell us? Roger’s size doesn’t matter because of how he uses it, with an acute sense of inflection and timing in his pentameter to squeeze the ultimate amount of pain and suffering out of his stories. And like Roger displays in his original “Nobody But Me”, he can go way up there in the register to really bring out the sorrow in a song. Writing songs that compliment your vocal strengths is something most artists struggle with. This is one of Roger’s greatest assets. Even in 1999, Roger was carrying an aged pain in his voice well beyond his years, yet he delivers it with a smoothness and confidence.

The late 90’s, early 2000’s here ten years later feel like the golden-era of the classic country resurgence, with some fans of Hank3 wishing he’d go back in that era, with Wayne Hancock fans finally wearing out their copies of Thunderstorms & Neon Signs, Dale Watson never reaching the same energy of Live in London again, and BR549 long since defunct. If you wish you could go back in time and re-live those same feelings or find out what you missed, Roger Wallace and Hillbilly Heights is where to start.

Today Roger Wallace can be seen on virtually any night of the week in Austin, plying his craft at legendary venues like The Continental Club, The Broken Spoke, and Ginny’s Little Longhorn, the same haunts Dale Watson keeps residence at when he’s in town as well. So why doesn’t he receive the same recognition as Dale and others nationally? One can’t say, but one listen to Hillbilly Heights will tell you that Roger Wallace is world class.