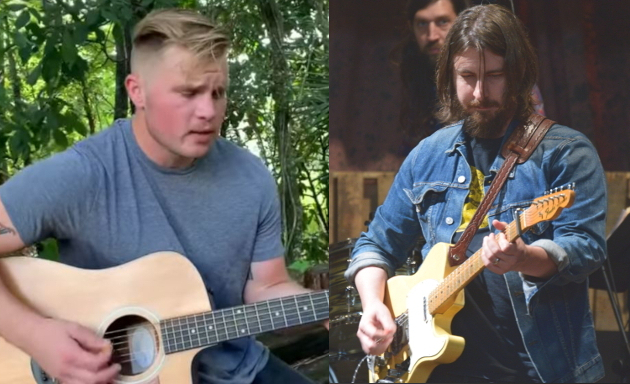 The team assembling around viral country songwriter Zach Bryan continues to be stocked with top shelf talent. The Tulsa, Oklahoma native shocked the country music world on August 23rd when he released a completely self-produced and self-distributed solo acoustic record called DeAnn, and it began racking up incredible streaming numbers simply off of word of mouth promotion and the power of Zach Bryan’s songs. Soon labels, managers, and publishers were in hot pursuit of the young star, despite him being a full-time active duty Naval enlistee committed to the military for the foreseeable future.

On Tuesday (11-12), Zach Bryan revealed that he’s been working with Grammy-winning producer extraordinaire Dave Cobb in the studio. Zach tweeted out a photo of himself in a studio control room with Dave Cobb hovering over the mixing board, and a couple of days previous Zach posted pictures of the famous RCA dog statue that hangs out in Dave Cobb’s haunt of RCA Studio ‘A’ in Nashville. Saving Country Music has since been able to confirm that Zach Bryan is indeed working with Dave Cobb on music.

In early October it was revealed that Zach Bryan had signed with WME for representation. WME is the preeminent name for booking in country music, also representing names like Alan Jackson, Chris Stapleton, Dolly Parton, Miranda Lambert, and Garth Brooks, along with more independent-minded outfits like Blackberry Smoke and Parker McCollum—the latter of whom helped Zach Bryan’s ascent by supporting the songwriter on social media early on.

It also appears that Zach Bryan is working with manager Danny Kang. Kang is the guy that swept in and started managing Mason Ramsey when the “Wal-Mart yodel kid” and his cover of “Lovesick Blues” went mega viral in the spring of 2018. He did the same with Lil Nas X as “Old Town Road” was making it big, and now manages both viral artists.

It’s way too preliminary to determine when we might hear the results of the efforts between Zach Bryan and Dave Cobb, but chatter has the songwriter has either signed or is close to signing a deal with Columbia Records or another major label outfit. In the meantime Zach Bryan has posted a new song and video called “Old Man,” which once again exemplifies his incredible talent with words and melody (see below).

The one criticism some listeners had with Zach Bryan’s breakout record was the lack of production. Though the 6-time Grammy winner has had his hits and misses over the years, Dave Cobb is definitely considered one of the best in the business.