Wait, All Of A Sudden Hootie & The Blowfish Is “Country” Too? 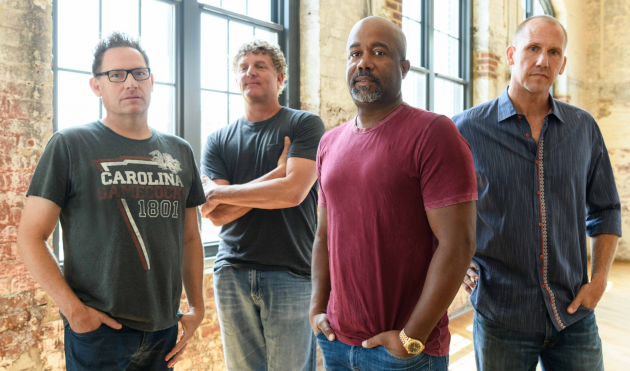 Look. It’s true that Darius Rucker makes an easy target when you want to go off on a tangent about all the interlopers in country music these days. As a pop rocker from the 90’s that turned country in 2008 to attempt to salvage his lagging career, he’s a country music carpetbagger if there ever was one. But if we’re being fair and honest, Darius Rucker has never been a part of the problem in country music, a few of his more questionable singles aside.

When Darius Rucker first made the switch to country, he was arguably more rootsy and twangy than many of his mainstream country counterparts. Some people love to roll their eyes over his cover of Old Crow Medicine Show’s “Wagon Wheel,” and more recently his take on Drivin’ & Cryin’s “Straight to Hell,” but covering these iconic songs is a hell of a lot better than collaborating with Justin Bieber or Marshmello like some of the other characters in “country” music are doing these days.

But how in the name of country music did Hootie & the Blowfish proper all of a sudden become a country band? Is it just because Darius Rucker is the front man? The group reunited this year to celebrate its 25th Anniversary, and booked 44-dates on their “Group Therapy Tour.” Okay cool, so Rucker took some time off from his country career to helm his nostalgia act for its 25-year-old celebration. That’s understandable and innocuous. No harm no foul.

But all of a sudden Hootie & the Blowfish—not just Darius Rucker—is signed to Universal Music Group’s country imprint in Nashville, is planning to release a new record on November 1st called Imperfect Circle, and just released a straight up pop rock Hootie & the Blowfish single called “Hold On” that has just become the “most added” song on COUNTRY radio, rocketing all the way to #30 on the charts upon its debut. That’s right, as we were all jamming out to the new Cody Jinks records, Hootie & the Blowfish has officially become a country music group with a major label deal, full support from country radio, and all the other rights and privileges of a mainstream country music act thereof.

How the hell did this happen? How does this make any sense at all? How can a long-established and universally-recognized pop rock band waltz right into country music and get handed a Top 30 single straight out of the chute, when the excellent singles recently released from Ashley McBryde and Maddie & Tae can’t even crack the Top 40? The current George Strait single is sitting at #56. And that’s the real concern here—the hopscotching nature of this whole thing. Hootie & the Blowfish? Why on God’s creation does country music need to throw its resources behind these guys who will probably be in the Rock and Roll Hall of Fame someday, when there’s so many other hungry mouths to feed, and so few spaces at the trough?

It’s not that this new single “Hold On” is terrible or something. It’s a pretty standard and formulaic pop rock song, full of pith and platitudes. And yeah, compared to some of the other singles out there lurking on country radio, it’s pretty unoffensive. But that’s missing the greater point. Even with the Justin Bieber and Marshmello collaborations peaking on the Billboard Hot Country Songs charts at the moment, at least they’re one-off situations. Hootie & The Blowfish is here to stay. They’re going to be like the in-laws that arrived for Christmas dinner and never left. Perhaps we should induct them into the Grand Ole Opry just like we did Darius.

Country radio, country labels, and country charts are for country artists. Do you want to get into the tired old argument again about “What is country?” Good, because neither do I. But we should all at least be able to agree that a band that spent a quarter century not being country shouldn’t be able to just all of a sudden declare they’re country without changing their sound at all just because it’s the easiest avenue to radio support. Perhaps if the Hootie members had done like Darius, and at least attempted to ingratiate themselves to the country community by releasing some country songs, and embellished their stories about how they’ve always listened to country music and grew up with it, yaddada yaddada, we’d at least have a debate on our hands of what to do with them. But they’re not even doing that. This is a straight up and long-established pop rock band releasing songs through country.

All the best to Hootie & the Blowfish, and its inoffensive, formulaic arena pop rock. But call it country, and we have a big, big problem. There’s too many artists out there that devoted the first quarter century of their lives and careers to actually making country music that never got their opportunity to all of a sudden let something like Hootie & the Blowfish just cut in line. It all underscores how Nashville has now become the epicenter for artists that can’t make it in New York, can’t make it in L.A., can’t make it in any other format, so they declare themselves country, and the gullible masses lap it up.

True country fans don’t want to hate on Hootie & the Blowfish. Those mid 90’s hits are fun to hum along to. But call it country, and you’ve just created a conflict where there wasn’t one, and crowded out more important artists in an already crowded space. This decision may work for Hootie in the short term, but it won’t look good for country in the “Cracked Rear View.”