Who is The Man Who Saved Historic Studio ‘A’?

As recently as the middle of last week it looked as if the fate of historic Studio ‘A’ in Nashville’s Music Row district was all but sealed, and its date with a wrecking ball was a forgone conclusion despite preservationist’s best efforts. The tenants of 30 Music Square West had received eviction notices, the current owner Bravo Development had pulled a demolition permit from the city, and the architectural sketch of the 80-unit/five-story condominium complex with a dog park and restaurant had been rendered and offered to the public. Despite a short stay of execution from Nashville’s Metro Historic Zoning Commission that would have only lasted until December at the latest, there was little anyone could do to save the musical landmark.

But don’t these things always have a way of working themselves out.

On Friday evening, the word came down that an unknown buyer had placed the Studio ‘A’ property under contract with the intent to purchase it from Bravo Development for $5.6 million. Bravo had finalized their deal for the building from country music Hall of Famer Harold Bradley, and the estates of Owen Bradley and Chet Atkins for $4.1 million just in late July. And after months of hand wringing and concern, organizing and petition signing, in one fell swoop, someone had come in and done what thousands of people could not do despite their best efforts: preserve Studio ‘A’.

But who was it? Who would pony up $5.6 million for a building that Bravo Development had deemed unfeasible to salvage, and even by preservationist’s estimates, needed hundreds of thousands of dollars to bring up to code, and couldn’t sustain itself financially with the current rents being generated by the building’s respective tenants? Nashville’s various local periodicals rushed to put a name and face to the new pending owner and find their motivations behind the sale. Eventually they came up with the name of “AMT Trust” as the entity that had placed Studio ‘A’ under contract. A little more digging revealed the name “Aubrey Preston” behind AMT. And then, and only then, did they know this wasn’t simply another developer or investor buying the property out from under Bravo. This was the moment all of the Studio ‘A’ preservationists had waited for when an altruistic philanthropist swept in at the 11th hour to save the building.

Many names of men and institutions that may be in a position to purchase historic Studio ‘A’ had been proffered up over the last few months as prospective Studio ‘A’ saviors—names like Scott Borchetta and Mike Curb, institutions like Belmont and Vanderbilt Universities—but none of these institutions or individuals stepped forward. In the end it was a name not known by many, inside or outside the middle Tennessee mindset; a man who as done this kind of thing before, but prefers to stay a step outside of the media, and let his actions speak for themselves.

Aubrey Preston was born in the Appalachian foothills of East Tennessee, where the very roots of country music sprung to life during America’s formative years. But Preston left the region in his 20’s to explore the greater world, and ended up in Colorado where he became a very successful real estate magnate in the Rocky Mountain state. It was while in Colorado that Preston had an epiphany that eventually led to what has now become a lifelong pursuit of preserving important elements of America’s heritage and landscapes. While exploring the Mesa Verde cliff dwellings at Mesa Verde National Park in southwestern Colorado, Preston understood what taxing the resources of an area can do to the long-term sustainability of a culture.

The Mesa Verde cliff dwellings are estimated to have been built by the local native population in the 1100’s, but were completely abandoned by the 1300’s. “There you have a perfect example of a population that deforested the area, used up all their resources and had to move,” Preston tells Brentwood Home Pages. “I just realized there is a balance you have to keep in mind.”

Like so many other East Tennessee natives, eventually the pull to come home became too heavy for Aubrey Preston. He returned to Tennessee with his young family, and in 1992 purchased a turn-of-the-century farmhouse 30 miles south of Nashville in a small community called Leiper’s Fork. At the time Lieper’s Fork looked like many of the small towns in America’s interior: abandoned in the move to cities and suburbs, and in the process of slow decay. But Aubrey Preston saw potential there. “You could see the makings of a city that never really developed,” Preston told Country Living. “I just had a feeling this community could still blossom, in a way that allowed both the newcomers and the old-timers to win.”

Leiper’s Fork was at a crossroads at the time. The 200-year-old community was right in the path of two interchanges in the impending I-840 corridor, and was destined to be overrun with aggressive development. So Aubrey Preston dug deep into his pockets, and between May of 1994 and the beginning portion of 1996, he purchased nearly 2,100 acres in the sleepy town, including raw land, abandoned commercial property in the town’s Main Street-style heart, and historic houses in the community that may be in jeopardy. 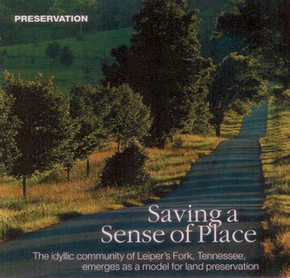 Preston set up a new music venue for the town, and gave local schools over $500,000 for art-based curriculum. He then set out to create land trusts and other covenants throughout the town to make sure Lieper’s Fork could control its own growth and its own destiny, and not be at the mercy of developers who would be governed by profits instead of sustainability and preservation. And Preston has ensured it will be this way until eternity. “I wanted to create a bonfire of preservation,” Preston says about his Lieper’s Fork efforts, not just preserving that small town, but creating an example of how it could be done in most any rural community in the country.

Today, Lieper’s Fork is a destination spot in middle Tennessee, and one of the most desirable communities to live in.

But Aubrey Preston is not just a real estate mogul and preservationist, he is also a musician with a passion for preserving the musical legacy of middle Tennessee and the southern United States right beside its important cultural landmarks. Preston was seminal in the development of what is called the Americana Music Triangle—a cultural tourist corridor looking to preserve and promote the roots and birthplaces of American music across a five state region. Preston spearheaded a similar program called the Discover Tennessee Trails and Byways before taking on the Americana Music Triangle. 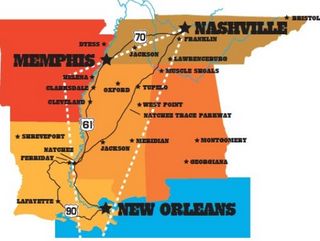 The idea is to draw cultural lines between Nashville’s country music lineage, the blues and rock & roll of Memphis, the jazz and Cajun of New Orleans, and everything in between. “What if we took this and made this one community?” Preston said to USA Today. “In a global world, if we want to attract real visitors, we need to have a bigger product. If you want to be good at something, you have to have deeper inventory … From all the places in this triangle, this is where the music comes from.”

Aubrey Preston collaborated with the Americana Music Association for the project, toured to the various states and communities that were mapped to be a part of the initiative, but also made it clear this wasn’t a money-gathering venture that would result in tourist traps. “We intentionally have not wanted to accept any donations. We don’t want the design of this project to be built with any advocacy influence. It needs to be built for the visitor,” Preston says. He subsequently has organized the 10-day Americana Experience music festival to be a hub for the Americana Music Triangle.

And this is just where the preservation efforts of Aubrey Preston begin. He was a huge help in restoring the Franklin Theatre in Franklin, TN, and regularly works with the Williamson County Convention and Visitors Bureau.

Though the majority of Aubrey Preston’s preservation work has been in communities south of Nashville and not in Music City proper, the pending purchase of Studio ‘A’ symbolizes one giant leap for the preservationist right into the battle raging for the heart of Nashville amidst the city’s rapid growth.  “I’ve seen that movie too many times,” Aubrey Preston once said about his Lieper’s Fork efforts. “Revitalizations can start out with a lot of idealism, then newcomers show up and the original charm is lost.”

That is exactly what is happening to many of Nashville’s important and historic neighborhoods that have music as their epicenter. But thanks to Aubrey Preston, one very important landmark will be spared. “Studio ‘A’ has enormous historic value,” Preston said in a statement about the purchase. “We see it as an absolutely essential part of the Music City brand that cannot be destroyed.”

READ: How Nashville’s Economic Boom Could Kill Its Creativity