Will Nashville Be The Next Detroit?

During last week’s Super Bowl, one of the most gut-stirring commercials featured rapper Eminem in a spot for Chrysler, showing solidarity with the embattled city of Detroit which has taken the brunt of the economic downturn over the past few years, and by proxy has become the brunt of jokes that many times unfairly portray the hard work and strength that has come out of that city and its people.

When cities like Detroit have large sectors of their economy focused around one industry, it can leave them vulnerable to economic swings. Music City, just like Motor City, has a large economic stake in one area, that of course being the music industry and its subsidiaries, potentially giving Nashville the same vulnerability that has led to record unemployment and a general economic malaise in Motown.

The knock against Detroit was that its auto industries were stuck in models of the old economy, that they were unwilling to innovate and change with the times, or come up with new and fresh ideas. That they were creating products that Americans didn’t want, and that there were issues with quality. Do some of these same criticisms not ring true with the music that is being turned out on the similarly antiquated assembly line of Nashville’s Music Row? 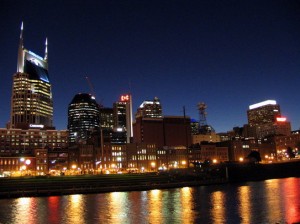 Granted, compared to Detroit, the city of Nashville does have a fairly diversified economy. With large stakes in finance, health care, and insurance, a vibrant tourism and trade show culture, and some big universities, it’s hard to say that even if the music industry completely imploded, it would leave Nashville bankrupt. And music-based institutions like The Country Music Hall of Fame, The Grand Ole Opry, and possibly some of it’s rights and publishing businesses would likely stick around, even in a cataclysmic scenario.

But at the same time, the music industry is so concentrated in “Music Row”, a collapse of this micro-economy could leave a gaping economic hole. And unlike Detroit, where the majority of the domestic auto industry is headquartered, a lot of Nashville’s music infrastructure is funded by major labels and entities headquartered elsewhere, in New York, LA, or overseas, that simply use Nashville offices as satellites and subsidiaries. If they leave, it could leave a much larger empty footprint compared to the “scaling back but staying put” that happened in Detroit.

One thing that has kept Detroit from becoming a virtual ghost town is that the government stepped in and bailed out the big auto firms and backed up the local economy. It is pretty easy to sell the auto industry as vital to the overall economy, with transportation being an essential need, and a backbone of American economic development for a century. The auto industry is also tied heavily with the vibrancy of the blue collar workforce. But can we really sell Trace Adkins’ “Brown Chicken Brown Cow” or “Honky Tonk Bandona Donk” as essential economic elements? Art and music funding are the first things to be cut out of federal budgets during economic downturns. And hasn’t the will of the people and the ability of the government to bail out an industry changed since the government takeover of GM and Chrysler?

Without question, the music industry is going through massive contraction, and as you look at Nashville, the question becomes, “What’s the plan?” The tailspin the industry is in is obvious, but they seemed to be focused on blaming it on the actions of others: illegal downloaders and such, instead of trying to define what they are doing wrong. In some ways it seems like the same things that are dooming Music Row are being indulged in even more. More formulaic music, more focus on big names as a lack of talent development continues. If there is a plan, it seems to be “make hay while you can at the expense of the future”, trading a sugar high for a sustainable future of music.

Read Why Country Music Is In Trouble

Nashville’s Music Row is not all to blame for the tough times in music. The move to digitization has decreased revenue, and the general problem of music consumers having so much access to so much music has created an overload, marginalizing the effectiveness any one music project can have. And I don’t mean to be alarmist or “talk down” Nashville’s economy. But we live in an era where whole sectors of the old economy have dried up. Is it a stretch to see the rapidly declining revenue numbers for music leading to a massive reduction or reorganization of the music business as we know it, and this directly effecting Music City in a large scale manner?

When hard times hit Detroit, many Nashville-based musicians lent their support in many ways. The song “Shutting Detroit Down” by John Rich is a good example, and of course, it was a musician, Eminem, that lent his support through the aformentioned Chrysler commercial, that regardless if it had any economic impact, impacted the pride of Detroit’s embattled population. I think it goes without saying that the talent of Music Row would rally around Nashville as well if hard times befall the city. They certainly did so during last year’s record flooding in middle Tennessee. The question would be, with the big money leaving town, the infrastructure auctioned off or significantly downsized, and the relevancy and popularity of it’s stars marginalized, would anybody listen?