Willie Nelson to Complete “Trilogy of Mortality” with New Music

Willie Nelson turned 86-years-old last week, but don’t expect to see him slowing down anytime soon. If anything, he’s putting his foot down on the gas for 2019, announcing a new album, and recently extending his Outlaw Music Festival dates which will keep him busy well into the summer.

As first reported by Saving Country Music in mid April, Willie Nelson’s latest album will be called Ride Me Back Home. Now we have all the details of the new record. To be released on June 21st through Sony’s Legacy Recordings, the album is said to complete a trilogy of mortality that Willie has been making with his last three records. 2017’s God’s Problem Child and 2018’s Last Man Standing are the other two installments.

The new album will include multiple originals written by Willie Nelson with producer Buddy Cannon, as well as a few tunes that may be familiar to country fans. Of the originals on the new record, one is called “Come On Time,” which is said to carry the same strong themes of mortality as Willie’s recent song “Still Not Dead.” Another original is called “One More Song to Write,” and a third is called “The Seven Year Itch,” which Buddy Cannon says means something different to him every time he hears it. “I still don’t know what that is.” 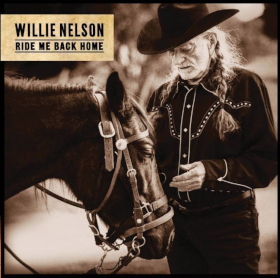 The cover songs include Guy Clark’s “My Favorite Picture Of You,” which was the title track from Clark’s final album released in 2013. There’s also a recording of Billy Joel’s “Just The Way You Are” that was supposed to be bound for a tribute to the piano legend that didn’t materialize, but will make the track list for Ride Me Back Home instead. Those who’ve seen Willie Nelson perform lately have probably gotten a kick out of his rendition of Mac Davis’s 1980 hit “Hard To Be Humble,” which Willie sometimes performs with his two musical songs Lukas and Micah if they’re around. Willie’s version with his two sons joining him also makes the track list.

Willie Nelson also covers himself with a new rendition of his 1972 song, “Stay Away From Lonely Places.” “I’m the biggest Willie Nelson fan there is, and I thought I knew every song that he ever did,” says producer Buddy Cannon. “But I had never heard that song. It sounded totally new to me. He’s a born troubadour. It’s the greatness: That early genius that was him and his songs is still there.”

The title song for the record was written by Sonny Throckmorton, who was said to be inspired to write the tune after he heard of Willie’s work adopting horses, which he stables at his Texas Hill Country ranch. A picture of Willie with a horse adorns the front cover of Ride Me Back Home, and his care for horses makes the backdrop for the video of the song (see below).

Willie Nelson’s Ride Me Back Home is now available for pre-order.