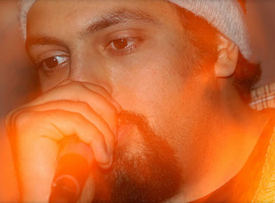 Every time the topic of country rap is broached, accusations fly that people who oppose the emerging sub-genre are simply opposed to country music evolving. But songs like Tim McGraw’s “Truck Yeah” and Blake Shelton’s “Boys ‘Round Here” would be bad even if the verses were sung instead of rapped. The vast majority of country rap is garbage to begin with because its aim is either strictly commercial, or it is a cry for relevancy from an aging artist. Trying to mix two forms of music that are naturally foreign to each other just makes the offense that much worse.

But that doesn’t mean it’s impossible to mix elements of American roots music with elements of hip-hop and end up with something that is an honest artistic expression, full of creativity and respect for both art forms; something that can entertain a wide audience not by appealing to the lowest common denominator, but by offering an inspiring demonstration of talent.

Enter Adam Matta, an extraordinary and gifted old-school beat boxer who skills downright defy comprehension. Even better, Adam Matta is enthralled by the art of collaboration, including working with roots musicians. Over the years, Matta has lent his talents to the Grammy-nominated Carolina Chocolate Drops, The Wiyos, and the rootsy sound composer Sxip Shirey to name a few.

Adam Matta is just one example of a positive collaboration between the country and hip hop world. Others like to cite the bluegrass and dance beat-melding Ganstagrass. Beck has done some interesting things in the genre-bending realm that still treat the music with respect. And the Carolina Chocolate Drops even without Adam Matta have dabbled in blending music from the traditionally black and white worlds for years.

So when someone accuses you of being closed-minded to country rap or to country music evolving, give them a snoot full of Adam Matta as an example of cross-genre collaboration done right.