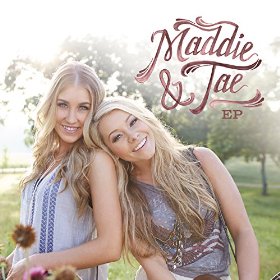 No matter where you stand on it, the enigma that is Maddie & Tae’s “Girl In A Country Song” has made for grand country music theater in 2014, marking one of the most talked about musical offerings since Kacey Musgraves’ “Merry Go ‘Round.” The song takes a swipe at the same sort of Bro-Country that has completely permeated country music’s airwaves, while still remaining playful enough where egos can’t be bruised (mostly) or turf wars can’t break out between the country music sexes.

But similar to Kacey Musgraves, we didn’t really know what to make of Maddie & Tae beyond this one song because we didn’t really have any other offerings to balance it with aside from a few acoustic performances at radio stations. Was this simply another Scott Borchetta pop country Frankenstein brought forth to be an alternative to Bro-Country to where the country music industrial machine gets you coming and going no matter what side of the debate you stand on? Cute little 18-year-old girls releasing a song that starts of with a hip-hop beat seemed so easy to refute, even if the sentiments of the song struck a favorable chord.

Make no mistake, the emergence of Maddie & Tae is the result of tactical gaming of country music’s notoriously malleable masses by label types, but that doesn’t mean that the music can’t be any good. “Girl In A Country Song” really didn’t help answer the question of, “Who are Maddie & Tae?” It exacerbated it. Were the hip-hop elements simply there for irony? Were these girls really influenced heavily by classic country as they said?

So now the young duo has released a four-song EP, and all of a sudden a brand new set of parameters emerge. You do hear those classic country leanings in the songwriting. You hear fiddle solos and steel guitar by god. You hear two girls singing in close harmony with heavy twang about similar themes once championed by Tammy Wynette and Loretta Lynn. And you begin to realize that whether Maddie & Tae are a machination of Big Machine Records or not, their music truly is living up to the more traditional and tasteful approach they were touted as embodying when they first emerged.

Granted, we only have four songs to draw from. But from what I’m hearing, the Maddie & Tae EP might just be the best offering of mainstream country so far in 2014, and I’m not kidding. Moreover, listening to “Girl In A Country Song” in the context of additional music refutes many of the concerns it initially posed, and emphasizes the song’s strengths. Maddie & Tae really are traditionally-leaning country girls who love to instill wit and a strong sense of feminine values into music that is both smart and fun, and fairly well suited for the listening enjoyment of both sexes and a general audience.

The other song floating out there in acoustic form before the release of this EP was “Sierra.” Already a witty and smart tune in its raw form, when fleshed out in the studio, we really see the potential of the Maddie & Tae project come to life. Up tempo and twangy, with fiddle and steel guitar right out front and a story fit for Dolly or Tammy with a few modernizations, this song announces Maddie & Tae as that potential act that can bridge strong country roots with present-day relevancy. Even the slight presence of electronic accoutrements doesn’t feel like a detriment here, but a tasteful way to bring the roots of country forward to a new audience.

This is followed by “Fly”— the sentimental offering in the group that revitalizes the inspiring style of female country indicative of the early careers of Lee Ann Womack and Martina McBride. It may be a little too adult contemporary for some, but “Fly” is a solid offering that illustrates a deeper side to these girls’ otherwise silly and smart approach. And again the song endears itself to discerning country ears by relying on fiddles to fill the solo allotment instead of Stratocasters.

“Your Side of Town” is where the electric guitars show up in force, and this is the song that sounds more similar to what we’re used to from country music’s leading ladies of today like Miranda Lambert, with attitude dripping from the lines and the fiddle fighting for attention. But the song still fits into the interesting space the duo has carved out for itself with this EP. Maddie & Tae are great singers as well, though I suspect their twang is so pronounced, it will be polarizing for some listeners.

Like every good EP should set out to accomplish, this collection of songs introduces you to what Maddie & Tae are all about without exposing too much, and wets your whistle for what else might be in store. With “Girl In A Country Song” cracking the Top 10 of the Country Airplay and Hot Songs charts on Billboard, we might expect a fairly quick turnaround to a full-fledged album. But for now, this EP offers a fun experience, and good insight into what this much debated and ballyhooed duo have in store.