When I saw a new Ryan Adams album was coming down the pike, I honestly didn’t know what to think. I’ve been so hot and cold on the guy over the years as he shape shifts from the whims of identity crises and style changes, it’s harder to form a solid opinion about him than it is to conjure up a firm stool after 6 weeks in interior Mexico.

His early stuff with Whiskeytown and during those formative Bloodshot Records years holds some serious Gram Parson’s-inspired country music gold. And then all of a sudden he’s popping his collar, frizzing his hair, and playing pop rock. And then comes a period where he’s putting out anything and everything he a can cook up in a studio with no governor, like he’s Beck or something and can pull that kind of thing off. At some point I caught the Neil Young syndrome with him, where I like him, but absolutely can’t stand the dude at the same time. And didn’t he marry Mandy Moore and quit music just a couple of years ago? Hell I don’t know. 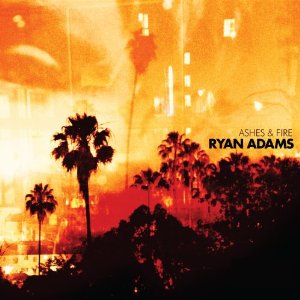 When I saw NPR had fingered Ashes & Fire for one of their ‘First Listens’, I thought hell, I’ll navigate over there and give it a sniff, and I swear, 30 seconds in I knew this album was going to be brilliant. And it is….in places.

First you must understand this album is not country, and it’s not rock n’ roll. It is solidly Americana, in the true Americana mold that Ryan helped codify during the early oughts, not so much some of the current Americana crop that sounds like pandering to the NPR demographic, or some others trying to out-Guy Clark each other. Regardless of the quality, I think this is the album Ryan Adams wanted to make, irrespective of trends.

Adams has been known to play the producer role in music, Willie Nelson’s Songbird from 2006 for example, and with this album, you can tell why. This might be one of the most well-produced albums I’ve ever heard. Helping Adams as producer was the famous Brit Glyn Johns, who is the second Johns to work with Ryan Adams. Glyn’s son Ethan Johns produced Adams’ Heartbreaker and Gold in the early 2000’s.

The problem with this album is that it lacks mustard. It really drew me in, but did not hold me. It never got off the ground. It was like the beautiful, brand new car, perfect in every way, that you’re scared to take out on the road because it might get a scratch. I kept wanting it to just go, for Ryan to unleash, but he never did. He was almost too careful, too perfect. To many people, this is what will speak to them in this music. For me it held it back. There’s an undefinable inhibition to this album. All of these beautiful elements there, but they never get flowing all in the same direction.

Soft arrangements and space can be good, but songs like “Come Home” and “Rocks” captured the sleepiness of a castrated James Taylor, while “Chains of Love” made me feel like I was soaring through the clouds on the back of a silver luck dragon with its wistful poppiness. But damn if “Ashes & Fire” isn’t a great, mid-tempo song, or that “Dirty Rain” doesn’t have some great lyrics. For all the great production, this album still lacks spice, from the lack of contrast between the songs, or cutting depth or sharp wit in the lyrics.

So I guess I’ll have to continue to hate to love to hate Ryan Adams. I’m not sure I could find the heart to argue against anyone who told me this album was brilliance, or that it was complete frap. Depends on taste I guess. But I can’t deny the effort is more solid than not. And you know, solid is good. Better than a Mexico-inspired lower GI travel illness.