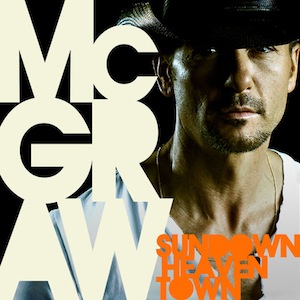 I write these proceeding words fully knowing that many will roll up to this Tim McGraw dissertation looking for a bowl of blood as recompense for the emotional direst recent Tim McGraw singles such as “Truck Yeah” and “Lookin’ For That Girl” have waged on the mental state of many innocent country music fans. But the simple truth is Tim McGraw’s new album Sundown Heaven Town deserves to be spared the most sinister strokes from the poison pen—not because it is “good” by some stretch of that flattering term, but because it symbolizes a turning of the page for Tim McGraw, and potentially, is a symptom of the turning of the page for the entire country music genre.

Welcome to the post “Bro-Country” age ladies and gentlemen—an era that we probably shouldn’t entertain as being filled with audio offerings that will in any way compare in quality with the greater historical panorama of country music, but one where we’ll see a clearly defined and much welcomed improvement overall in the music being offered for consumers’ listening edification.

Tim McGraw’s Sundown Heaven Town is an example of this. By golly Tim McGraw is actually learning. After he broke from the bonds of institutional subjugation at the autocratic hands of Curb Records which did everything they could to choke every last bit of life force out of Tim’s once high flying career—as accidentally or purposefully as it may have been—he ran to the open and cradling arms of Scott Borchetta and Big Machine to press restart. And almost as if to make up for the half decade he ceded to Curb, Tim started releasing the most ridiculous, panic-driven panderings to young people radio pop as possible in an attempt to regain his relevancy. However the results were so ghastly, even the deficient country music masses saw through it.

Tim’s first post-Curb single was “Truck Yeah,” and immediately McGraw announced there was no floor to the depths he would fall through to regain his pertinence. And for the most part, the single fizzled, especially considering the muscle Big Machine put behind it to reignite Tim’s career. The biggest single to come from Tim’s first Big Machine album came nearly a year later with “Highway Don’t Care.” As a much more nutritious offering, and one that sat much more comfortably in the confines of the adult contemporary style of pop country that has buttered Tim’s bread for years, it became a #1 hit, and the biggest hit on the Two Lanes of Freedom album.

The same story has played out so far for McGraw’s new album Sundown Heaven Town. The first single “Lookin’ For That Girl” was so far outside of Tim’s comfort zone and anything that could be considered “country” it was laughable, and on cue it stalled in the charts. That stuff may fly for Florida Georgia Line, but not for McGraw’s established brand. Then McGraw released his latest single “Meanwhile Back at Mama’s.” Once again a song with more substance did much better, making it to #2 in the charts.

The lesson here, at least for Tim McGraw, is that even in this bereft country music landscape we find ourselves in, it’s still better for him to be himself—that guy that makes moms all around the country swoon with his tight shirts and sentimental ballads. Tim can’t run with the young pups, and he shouldn’t try. And whether that was the purposeful approach to Sundown Heaven Town or the accidental result, you get Tim being Tim on this album, which means rooting out some of the best adult contemporary compositions the country industry has to offer and doing them justice.

What surprised me was the lack of drum machine intros, loud overdriven guitars, and ploys for radio play on this album. I was also surprised at the amount of steel guitar. No doubt Sundown Heaven Town still affords some creatively anemic moments, and others moments that are downright awful, but they are nowhere near in the measure you would expect from a Tim McGraw album, or really any mainstream album in 2014. The song “Dust” is probably the album’s laundry list “bro” offering if there was one, and still it’s hard to hate too vehemently. “Keep on Truckin'” trying to capture the vibe of the band Train in the country context, and probably should have been left on the cutting house floor. And songs like “Words Are Medicine” and “Sick Of Me” find McGraw striking out boldly to evoke soaring moments, but the lyrical impact seems to be just a little too flat to achieve those heights.

But even the worst song on the album by a long shot “Lookin’ For That Girl” gets relegated to the next-to-last spot on the track list, where it used to be tradition for track arrangers to bury what they believed was the project’s weakest offering. What McGraw seems to understand with Sundown Heaven Town is that albums are for the hardcore fans these days anyway, so you might as well make them count. You might as well make them where they say something and entice people to listen instead of simply being a landing place for hyped-up singles.

Sundown Heaven Town starts off quite strong with “Overrated,” which is something completely unexpected from Tim, and probably one of the best songs on the album. “City Lights” is also strong, and so are the more traditional “Diamond Rings & Old Barstools” duet with Catherine Dunn, and “Meanwhile Back At Mama’s” with better half Faith Hill. “Last Turn Home” achieves that high emotional response McGraw regularly looks to achieve with his song selections, and even though “Portland, Maine” has some people in that city a little upset (however playfully so), its expedition into the terrible head space proceeding a breakup is effective and resonant.

Tim McGraw’s Sundown Heaven Town does not come recommended, but nonetheless comes with praise for affording a template for how mainstream country albums should be made moving forward, and from showing improvement from the artist. Passive consumers who only pay attention to singles anyway shouldn’t be regarded when making albums. And an artist like Tim McGraw is much better off being who he’s always been, from both a commercial and a critical standpoint. Make good albums and you will be on the right side of where country music is headed, and create separation from the lost era when country believed clichÃ©s about beer and trucks would line their pockets forever.