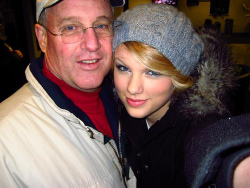 The short answer is, no. But you wouldn’t believe that from listening to Taylor Swift detractors or reading the comment threads on Swift articles. Quick to discount the young songstress, this is the first accusation you will see of why Taylor Swift’s success is a sham.

It sounds like such a sexy, plausible idea. The problem is it really is impossible for anybody to buy the massive public appeal Taylor Swift enjoys. Sure, money can set the wheels in motion, and make no mistake Taylor’s dad did offer material support to her career in its early stages. But Taylor’s success and meteoric rise depended way more on smart moves, her savviness with social networking, the appeal of her music (however good or bad you may think it is personally), the fact that her audience is the last bastion of the music buying public (little girls and their moms), and possibly most importantly, timing. In truth, Eric Church may have had just as much to do with Taylor Swift’s success as Swift Sr (see below).

No, this is an urban myth.

Scott Swift is a financial adviser for Merrill Lynch. Taylor’s mom is a homemaker. By most accounts, the Swift’s were wealthy, but not rich, living on an 11-acre tree farm before moving to the semi-affluent Wyomissing, Pennsylvania when Swift was 9, summering in a home in Stone Harbor, New Jersey. Swift’s family was solidly upper middle class, but in no way super-affluent to the tune of being able to shell out millions of dollars to make their daughter’s music career a reality. In fact Taylor was the one shelling out millions for her parents when she bought them a $2.5 million mansion in Nashville in August 2011.

What Swift’s parents did do is support her no different than most families might support a child pursuing their interests. Taylor’s music career was not foisted upon her by her parents. They gave Taylor her gender-neutral name in hopes she would be big in the business world. Once she showed interest in showbiz and music, they paid for lessons, sent her to camps, chauffeured her to various songwriting sessions and coffee shop/club gigs, and eventually moved to Nashville as her career began to take off. The support of Taylor’s dad helped her career, but saying it was “bought” seems like a reduction of her family’s efforts, including the efforts of Taylor’s mother who remains a major part of her management team.

Did Taylor Swift’s dad buy a mass quantity of her first album to drive sales numbers?

Another common accusation. If he did, no smoking gun has ever surfaced to prove so. However this practice to artificially bloat sales numbers to increase visibility and attention through chart rankings is not uncommon, especially for inaugural albums. And let’s remember, Taylor’s first album was also the inaugural album for Scott Borchetta’s Big Machine record label, creating multiple reasons to show successful sales numbers. How might we know if this tactic was used in Taylor’s case? It could come out in litigation, which leads to the one possible unscrupulous event in Taylor Swift’s rise.

Dan Dymtrow was Taylor Swift’s first real manager; a big, New York-based talent representative that also represented Britney Spears for a period. He was hired in April of 2004 when Taylor was 14, and was fired by the family right before Taylor signed with Scott Borchetta and Big Machine in July of 2005. Dymtrow was the one responsible for introducing Taylor to Borchetta and the booking agency CAA. After allegedly being “strung out” by the Swift family, Dymtrow was dumped, allegedly at the behest of Scott Borchetta.

Dymtrow was only paid $10,000 for, as he claims, helping launch Taylor Swift’s career, and in response filed a lawsuit in 2007, demanding the 5%-10% of Taylor’s earnings his contract with her stipulated. Certain provisions of the lawsuit were initially thrown out, but the one claiming “unjust-enrichment” remained in tact.

The most damming piece of evidence from the lawsuit was an email Taylor’s dad supposedly sent to Scott Borchetta showing a prearranged agreement to dump Dymtrow before Big Machine would sign Taylor. “Enough with the Dymtrow,” Scott Swift allegedly wrote to Scott Borchetta. “You asked me to break both his legs, wrap him in chains and throw him in the lake. I did.”

The defense for the lawsuit was a technicality. Taylor Swift was under 18 when she signed the contract with Dymtrow, and since the contract did not have court approval, which is law in New York for a minor, Swift and Borchetta’s lawyers claim the contract is null and void. The Swift’s and Borchetta did not attack the merits of the contract itself, though they did say Dymtrow is grossly exaggerating his impact on Taylor’s career.

The other interesting part about this lawsuit is how secretive it has been. It was started in 2007, but was not made public until October of 2010. Since then, there has been no word on the progress or outcome of the suit, and numerous calls and emails by Saving Country Music to the various parties rendered only “no comment” replies.  The hushed nature of this lawsuit is what has led to some of the suspicions, misconceptions and urban myths about Taylor’s meteoric rise.

But even if all of Dymtrow’s accusations are true, does this somehow frame Taylor’s dad as the Daddy Warbucks of her career? No. If anything, it proves that the well-connected Dymtrow was the one responsible for Taylor’s rise, not her dad.

In October of 2006, Eric Church was on a major arena tour opening for Rascal Flatts. Church continuously played too long, and too loud, defying the wishes of Rascal Flatts until he was asked to leave the tour. Who was Eric Church’s replacement? Taylor Swift, sitting in the cat bird’s seat because of her relationship with live promoter CAA who former manager Dan Dymtrow introduced Swift to. This was her first major concert tour break and significantly helped propel her career because it paralleled the rise of her first single, “Tim McGraw”.

But whether it is crediting Eric Church, Dan Dymtrow, Taylor’s dad, or Scott Borchetta, discounting all of Taylor Swift’s own hard work, and the right time/right place appeal for her songs and image seems to be misunderstanding of what has led to Taylor Swift’s success.