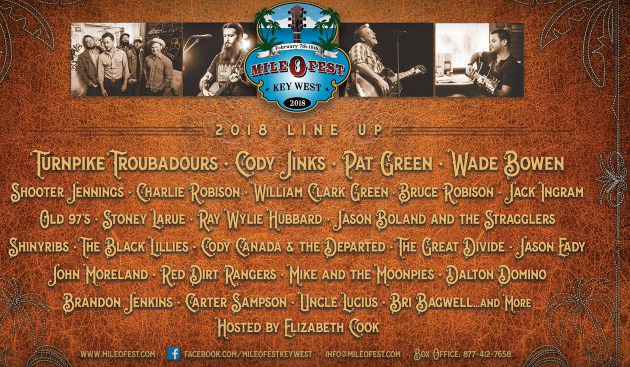 You’ve never heard of the Mile 0 Festival in Key West, Florida before, but you have now. And it will be hard to forget about it once you feast your eyes on the pretty ridiculous lineup they’ve assembled for their inaugural run. It’s scheduled for February 7th – 11th 2018 at the new Truman Waterfront Park Amphitheatre in Key West, as well as bars up and down the island’s famous Duvall St.

With headliners like the Turnpike Troubadours and Cody Jinks, and an undercard consisting of folks like Ray Wylie Hubbard, Jason Boland, Shinyribs, and John Moreland, this will be one of 2018’s biggest destination festivals for Texas Music / Red Dirt fans assembled all year, and right in the middle of the tropics. It’s like one of those music cruises, only with a beefier lineup, and you never have to leave land.

Key West is the southernmost point in the continental United States, and also mark Mile 0 on Hwy 1. The Truman Waterfront Park Amphitheatre is a brand new, $4 million dollar facility in the city’s expansive new municipal park overlooking the water. About the only thing missing from the Mile 0 Fest lineup at the moment is a little representation from the women of Red Dirt/Texas Music, aside from Carter Sampson, Bri Bagwell, and Elizabeth Cook who is helping to host the event. However this is just the main stage lineup. More names will be announced soon.

Mile 0 Fest is being promoted by OhWook! Productions, which states to have more than 20 years of experience in the concert & event industry. Pre-sale tickets will go on sale August 25th, with General Admission, and Gold and Platinum level VIP packages available. The fest is also planning to release all-inclusive packages that include hotel, condo, and vacation rental options on the island resort.

More info on the fest as it becomes available.