“It’s Not Fair,” Brad Paisley Says, “I’m Not Going To Take This Anymore” 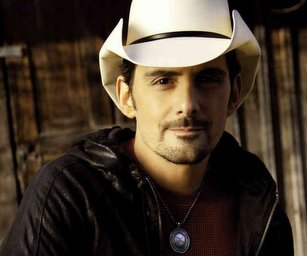 Brad Paisley is mad as hell. “I’m not going to take this anymore,” he attests to The Associated Press in an article posed on Monday (9-1). He later goes on to declare, “It’s not fair.” What is Brad not going to take anymore? What is not fair? According to Paisley, it’s not fair that he got jobbed by the criticism of his song “Accidental Racist” from last year. And now the critics are being unfair when it comes to his new album Moonshine In The Trunk. This is the reason he “leaked” his album early, and unspokenly, why the album hasn’t sold well.

The lampooning of “Accidental Racist” by late night talk shows and Saturday Night Live before the release of Paisley’s 2013 effort Wheelhouse has been and continues to be at the forefront of Paisley’s rhetoric about Moonshine In The Trunk, and a scapegoat for any and all problems the country star might encounter. But what effects “Accidental Racist” actually had on the fortunes of Wheelhouse, and especially the fortunes of Moonshine In The Trunk, seem quite inconclusive, if they didn’t indeed result in a net positive. Yet Paisley continues to drive this “Accidental Racist” point home, and lately, with a good deal of vitriol and spite that is uncommon from Paisley, and a little short-sighted, especially when considering the wealth and success he’s attained from the industry in what could very well result in a Hall of Fame career.

Maybe the sales for 2013’s Wheelhouse were a little bit too low for Paisley, but it debuted at #1 in country, and #2 overall on the Billboard charts, and sold around 100,000 copies during the first week. Couldn’t the curiosity factor of “Accidental Racist” actually have boosted sales? It sure did for the song itself. As Saving Country Music explained at the time, “Accidental Racist,” despite not being released as a single, became an accidental hit. It charted on Billboard’s Country Digital Songs Chart at #18, and their all-encompassing Hot Country Songs chart at #23. The case could certainly be made that the criticism of “Accidental Racist” created extra interest in Paisley’s music. Maybe Paisley did not receive the type of sales numbers he was used to experiencing in his career, but that’s every artist in this new music streaming environment.

But back to this Associated Press story. “Whatever critic wants to give it two stars, I don’t care,” Paisley claims in the story. But apparently he does care, or at least he cared enough to fire off an angry tweet about a review from For The Country Record, which said about the release, “[It] presents few standout hits, particularly commercially, and seems a curious but desperate stab to push boundaries in a way that’ll make him relevant again.” Paisley later deleted the tweet, and has been trying to present himself as uncaring about criticism, “Because guess what? People know better, they’ve heard it,” he tells the AP. “They’ve heard it, and I got the first presentation of it.”

Ah yes, the whole “leaking” of the album that Brad Paisley put so much effort into. He recruited Jeff Gordon, Ellen Degeneres, and even a NASA Astronaut to help him “leak” the album in what was presented to the public as actions being against his record label’s will. He also took what had to be a time consuming position as a judge on ABC’s new reality singing competition Rising Star to help get his face and music out there in the public more prominently. And what was the result? Debut sales for Moonshine In The Trunk were roughly half of what they were for Wheelhouse a year ago. Estimates have sales around 48K to 53K.

In the Brad Paisley story, the AP says, “Paisley enlisted friends old and new … to help him leak every song on ‘Moonshine in the Trunk’ before its Aug. 26 release, trading jabs with his record label boss along the way.”

Yes ladies and gentlemen, this is the Associated Press, THE ASSOCIATED PRESS (a clear violation of the AP stylebook to use all caps for emphasis) that is helping to perpetuate this absolute boldface lie that Brad Paisley leaked anything against the will of anyone, especially his record label who was clearly in cahoots with the entire operation. And despite the majority of Paisley’s fans continuing to believe this lie, a strange and disturbing twist surrounding Paisley’s whole “leak” exercise is that the people doing their journalistic service to the community by pointing out the fallacy of Paisley’s “leak” claims are the ones seen as the enemies and party poopers.

Because apparently you can’t criticize Brad Paisley. “What I don’t like is that I’m held to a way higher standard than other people,” Paisley continues to the Associated Press. “It’s not fair. It’s not fair in this town. When I do ‘River Bank’ and they go, ‘Well, what else you got,’ because it doesn’t mention cutoffs and it doesn’t do the things that everybody is complaining about, you know what I’m saying?”

Yes, Brad, I know what you’re saying. You don’t think it’s “Bro-Country,” and so people don’t have a right to criticize it, and it can’t be a bad song.

“I control the presentation,” Paisley told Billboard’s Country Update. “That, to me, is the most important thing now. Some music critic—let’s say they don’t understand what I’m doing and give me one star. My fans, they know better. The heard it first. Guess what? If you’re writing a review, you don’t matter now, because they’ve heard it. They’ve made their own mind up.”

Yes they did Brad. They did make their own mind up. And in pretty resounding numbers, they appear not to be impressed. This was the danger about the whole “leaking” exercise and the Rising Star judgeship. If it didn’t result in a rebounding, or at least a stabilization of sales and radio play, then it looks even worse for Paisley because of the effort exerted.

Is Brad Paisley really held to a higher standard than other artists? Is he receiving heavier handed criticism than let’s say, Florida Georgia Line? Are all criticisms simply based off of misunderstanding, or is there serious stylistic concerns by critics being convey in an intelligent and persuasive manner?

The problem with country music today is not the critics. The problem with country music today is there are no critics. There’s no Chet Flippo. There’s no Lester Bangs. There’s nobody from a major music publication willing to speak out and hold these artist’s feet to the fire, and to give them objective, honest criticism. And so when somebody does, these artists and their fans are appalled. Either you’re 100% positive, or you’re a bully, and there should probably be a law against you. Apparently the media is supposed to pretend the album leaking was real, and report how unfair it has been for Paisley recently without questioning his logic whatsoever, or soliciting anyone for a rebuttal or differing viewpoint.

The entire country music media community has simply become a promotional arm for the industry. The media publishes puff pieces that are nothing more than thinly veiled advertising copy, and the labels in turn advertise with these outlets. Everyone else is simply “haters” who are on the outside looking in when it comes to exclusive content and access to the artists. And this doesn’t go just for mainstream labels and outlets, but independent labels and outlets as well.

One of the reasons “Bro-Country” has taken over the airwaves is because popular media has taken a subservient and complicit role to the industry. There are no checks and balances. And that’s also the reason Brad Paisley’s career is in a tailspin. Brad Paisley is not the problem. The reason his album isn’t selling well is not because of the blow back from “Accidental Racist.” Please. America struck that whole episode from its memory many many months ago. It’s because Brad Paisley is an aging artist, and the styles of popular country music have regressed so dramatically recently that there’s no space for an artist like him. It’s over. His run as a preeminent star in country music has passed. But that doesn’t mean he hasn’t been afforded an astounding music career filled with tremendous success. And to cry “It’s not fair,” is not Paisley’s place. How about the hundreds of artists just as talented and entertaining as Paisley who never had their chance in the spotlight? Brad Paisley has sold 12 million records and has 14 CMA Awards, including Entertainer of the Year.

Brad Paisley has some good songs on his new album, as iterated by critical voices including Saving Country Music, For The Country Record, and many others. “Shattered Glass” and “American Flag On The Moon” are great tracks, but will Brad Paisley release these as singles? Will his label put the same big money behind them like they did “River Bank”? Or will he schlep out the schlock on the album, and then blame the critics when people bitch about the quality?

It sucks right now for Brad Paisley, and a lot of country music’s older artists who are getting shuffled out of the spotlight. But after the untold riches Brad Paisley has been afforded, he shouldn’t be complaining about the critics. He should join them in the effort to return some substance and balance to the format, so that songs like “Shattered Glass” and “American Flag On The Moon” can thrive on American radio, and not be relegated to album cuts that barely anybody will hear in the evacuation of the album unit as a relevant encapsulation of an expression of an artist.

But what do I know. Apparently since I’m a critic, nobody is listening.