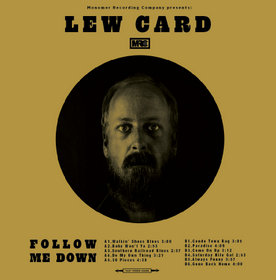 Cool old buildings and affordable living spaces are getting bulldozed in lieu of boxy and unimaginative condominium developments, eradicating communal points where artists can congregate and concentrate on their art as opposed to having high rents and other responsibilities hanging over their heads. It’s asked often why well-intentioned artists move to music towns only to lose touch with their principles and start cranking out commercial material, and it’s party because the next rent check is due. Historically, low rents have been the harbinger for marquee musical groundswells in places like Los Angeles, San Francisco, and Greenwich Village in the 60’s, and Austin and Nashville in the 90’s.

Austin songwriter and mandolin player Lew Card has just released a new album called Follow Me Down that takes his “low country hi-fi” sound and spices it up with a bit of old school blues and Leon Redbone-style ragtime jazz. Having played with so many other Austinites both on the stage and in the studio over the years, he calls in favors in his Rolodex and gets folks like Johnny Cash’s piano player Earle Poole Ball, fellow songwriter Doug Strahan, and The Tijuana Trainwreck Horn Section to stop by the studio and lend a hand.

Lew Card then took his song “Condo Town Rag” and teamed up with Seymour.tv to create a brilliant depiction of how when a city’s identity changes, so do our memories and sense of home and place. Using historical photos matched up with modern-day perspectives, it shows the troubling way the Austin skyline has been retooled in recent years by people who move there to take advantage of the artistic community, but ultimately become the catalyst for its demise.

In 2015, Saving Country Music didn’t bestow its annual “Video of the Year” award from the weak field of candidates. In 2016 we already have our second strong candidate in as many months (see the first).