At Sunday night’s 49th Annual Academy of Country Music awards, George Strait walked away with the evening’s top prize; the coveted Entertainer of the Year award, 25 years after he first received the award in 1989, and arguably the first time in 25 years a traditional country music artist has received the distinction. As “King George” has been wrapping up the final legs of his farewell tour, capping off a historic, Hall of Fame career that has seen 60 #1 hits, 33 Platinum records, and over 68 million records sold, the country industry has been giving him a symbolic standing ovation by bestowing him with some of the industry’s top prizes.

However some apparently are not happy about it, especially in the camp of the 2013 ACM Entertainer of the Year, Luke Bryan. With the fan voted dynamic of the ACM’s Entertainer of the Year, it has made it necessary for artists to lobby for fan’s participation, and none lobbied harder than the reigning ACM Entertainer. Luke Bryan and his camp put out an entire series of vote-getting videos leading up to the ACM’s of Luke crashing parties (Luke’s latest album is called Crash My Party), including a birthday party, a wedding, a baby shower, and a girl’s night. The series of highly-produced videos that clearly had a large advertising budget behind them was capped with a very emotional, tear-stained plea for Luke Bryan votes, showing his inner circle erupting in his dressing room during Luke’s 2013 win, and his parents crying about how much the award meant, especially in light of the passing of Luke’s siblings.

All of the other candidates, including George Strait, released videos asking for their fans to vote for them as well, but none put out even close to the effort of Luke’s camp. The result was both a very financial, and very emotional attachment to Luke Bryan winning Entertainer of the Year in 2014. As the Luke Bryan camp looked at it, it was theirs to lose …. and they did. And then emotions ran over.

Twitter blew up with angry Luke Bryan fans, the majority of which did not see George Strait as an “Entertainer.” That’s how Luke Bryan’s merchandising manager saw it (a spot once held by artist Cole Swindell), and his tweet Sunday night in the aftermath of the Entertainer announcement sparked off a Twitter storm, with many Luke Bryan fans agreeing, and many traditional country fans coming to King George’s defense. “It’s called Entertainer of the year on ho’s your career … Unreal Acm’s! Not an entertainer,” said Luke’s Merch manager Hunter Jobes. 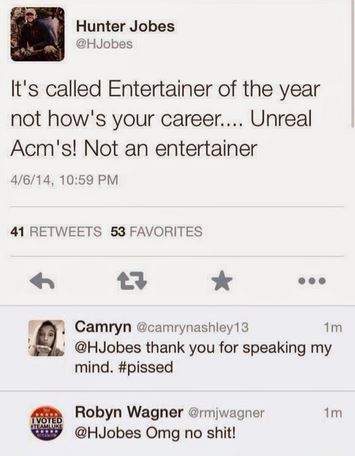 Photo from Farce The Music

Many others parroted the idea however, while others asked how there was any way Luke Bryan could lose a popular vote over George Strait with the type of social outreach Luke has compared to Strait—the same exact concern that was raised by Taylor Swift fans in 2013 when it seemed clear there was no way they could have been bested by the Luke Bryan camp. Neither side likely took into consideration that there is an industry vote that is also tabulated in the results, though the ACMs will not publish either the results of the fan vote, or the formula with which the eventual winner is found through to help alleviate some of the anger and misunderstanding the fan votes result in.

The fact that so many can’t see George Strait as an entertainer despite his historic, Hall of Fame record and career speaks to the widening cultural gap in country music. For many years country music’s traditional country fans have said there’s no respect in the new generation for the artists that came before and made it possible for an artist like Luke Bryan to be bestowed untold riches through the country music institution. And last night, in a wave of emotions, the true colors of many of country’s new generation shined through.