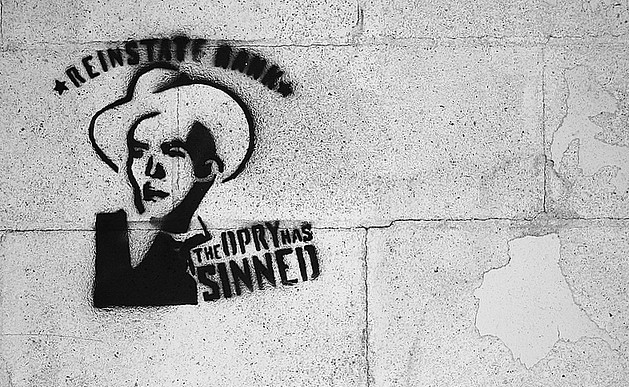 The new vice president and executive producer of the Grand Ole Opry said this week in an interview that Hank Williams will not be reinstated to the institution he helped popularize. Dan Rogers was named to the Grand Ole Opry’s new top post of executive producer (formerly called “general manager”) on August 5th, 2019 after the departure of Sally Williams, who held the position since 2017. Sally Williams replaced Pete Fisher who held the position for 17 years before departing to helm the ACM Awards.

“Hank Williams will always be a treasured past member of the Grand Ole Opry,” Dan Rogers said when asked about the possibility of reinstating the country legend. “The Grand Ole Opry is made of living, breathing artists who can contribute to the show, and to whom the Opry can give back. We have a long list in the member gallery of folks who have been members of the Opry from Uncle Jimmy Thompson, who preceded what Opry membership even meant … So that wall honors everyone from Uncle Jimmy Thompson to Little Big Town to Hank Williams.”

Hank Williams III started the Reinstate Hank movement back in 2003 in an effort to get the Grand Ole Opry to recognize his grandfather who was kicked out for drunkeness and missing rehearsals in 1952. The thought was that if Hank could clean up his act, the Opry would welcome him back with open arms. But Hank Williams never got that opportunity. He passed away in the back of his Cadillac on New Years Day, 1953. The Reinstate Hank online petition now has over 61,000 signatures on it, with even more signatures in the physical Reinstate Hank book that Hank3 would take around with him on tour.

But while casting aside the idea of Reinstating Hank, Dan Rogers inadvertently mentioned the reason why the case for Hank’s reinstatement is warranted, if only ceremoniously.

“Had Hank Williams lived, there is little doubt in my mind that…I would hope he would have returned to the Opry and all would have been great and right in the world. Unfortunately, he didn’t,” Rogers said.

This is all that Hank Williams III and Reinstate Hank supporters have been saying for the last 17 years. There is no qualm with Opry members vacating their membership role when they die. It’s about how when he was living, Hank Williams meant more to the Opry arguably that anyone else in the institution’s history, and the Opry meant a lot to Hank Williams. “There is not a single Opry night that happens where his influence isn’t felt. And there are many, many, many Opry shows where his music is sung,” Dan Rogers says in the interview.

Ceremoniously Reinstating Hank would be a way to mend wounds, and incidentally, would make for a good piece of positive publicity for the Grand Ole Opry. As Dan Rogers says himself, it would make everything “right in the world” when it comes to Hank Williams and the Grand Ole Opry. It wouldn’t stimulate a flood of families of deceased members clamoring for their loved ones to be reinstated as well. It’s the fact that Hank was never reinstated in life that makes the case for Reinstating Hank today a viable one.

Saving Country Music reached out to the camp of Hank Williams III to see if he had any comments on the quotes of new Opry boss, but there was no response. However Hank3 did reduce the price of Reinstate Hank merchandise in his online store on Thursday (2-13) when the interview with Dan Rogers was released.

Many fans have been wondering what is happening with Hank3 who has been out of the spotlight and not touring or releasing records for a prolonged period. Saving Country Music has reached out numerous times to get an update from Hank3, but he has declined to comment.