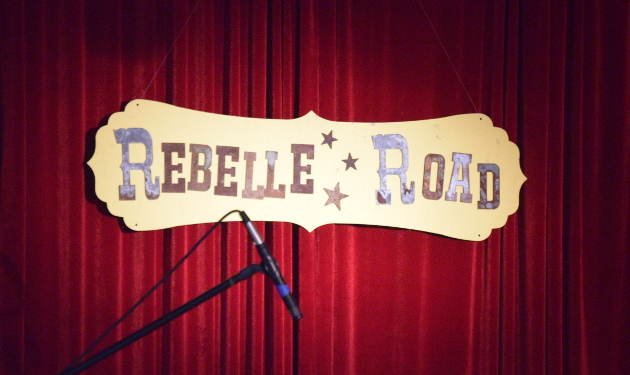 Founded by industry executive Karen Rappaport McHugh, who has helped to organize elements of the Stagecoach Festival and other events, along with artists KP Hawthorn and Adrienne Isom, Rebelle Road organized a gathering as part of 2018’s South By Southwest festivities in Austin on Wednesday March 14th, which included a panel about the issues plaguing women in country, and performances by artists young and old, up-and-coming and established.

Country, rock, and rockabilly legend Rosie Flores headlined the festivities along with speaking at the panel, and played a rousing set that resulted in standing ovations and boot scooting as she showed off some of her most recognized songs, as well as some new, more bluesy material ahead of an upcoming record. Austin notables T Jarrod Bonta and Jim Stringer also joined Rosie on stage, along with a 2-piece horn section.

California country artist and yodeler Alice Wallace began the performance portion of the event, and concluded with her new song “Elephants” which is very timely and resonant to the #TimesUp movement, and worked well as a cornerstone and conversation starter for the event. Austin’s Carson McHone featured songs from a finished album she’s looking to release soon. Jaimee Harris is another Austin performer who could have a big 2018 with an upcoming album, and brought an upbeat, retro sound to the festivities.

The Rebelle Road showcase had a little bit of everything, including songwriters such as Ali Holder, Christy Hays, and Jenny Van West, to raucous full bands like California’s Nocona, and Calico The Band. Nashville’s Ladies Gun Club also turned in a marquee set, backed by Aaron Lee Tasjan and his touring band.

True country was also well-represented at the event, with the younger Pearl Charles proving she’s one to watch. Emily Herring stunned with renditions of excellent songs such as “Last of the Houston Honky Tonk Heroes” and “Best Thing I’ve Seen Yet.” Her recent record Gliding is one to not overlook. And Austin bedrock performer Brennen Leigh also dazzled with songs old and new, including songs she’s had recorded by Sunny Sweeney and Lee Ann Womack. In the name of inclusion, Austin’s Chris Fullerton played songs from his 2017 record Epilepsy Blues.

Utilizing different perspectives on the same underlying issues, the women discussed the reasons women seem to be excluded from the modern country narrative, and what could be done to reverse the course. One important aspect often overlooked in the recent exclusion of women in executive and managerial roles in the music business. This in turn translates to lack of radio play and playlist consideration, and festival representation.

“Every meeting when I was having when I was 21 and 22-years-old seemed like I was giving a romantic invitation to the man I was meeting with,” said Sally Jaye of Ladies Gun Club, which is one of the reasons she chose to start her own record label.

Most importantly, the Rebelle Road event at SXSW was a starting point for the Los Angeles-based organization to expand the conversation and spread awareness in ways that will impact the music and support for women in the coming years, similar to other efforts like Change the Conversation in Nashville, and TeXchromosome in Texas. Beyond the traditional conversation starters and featuring of artists in live performances, Rebelle Road also wants to expand into TV and movie opportunities, and is also launching a podcast.

For a first-year SXSW event from a burgeoning organization, the Rebelle Road showcase was very well done, was well-curated with talent, and foretold of a strong organization open-minded to fresh ideas of how to solve systemic problems facing women in country.

More information can be found at RebelleRoad.com .