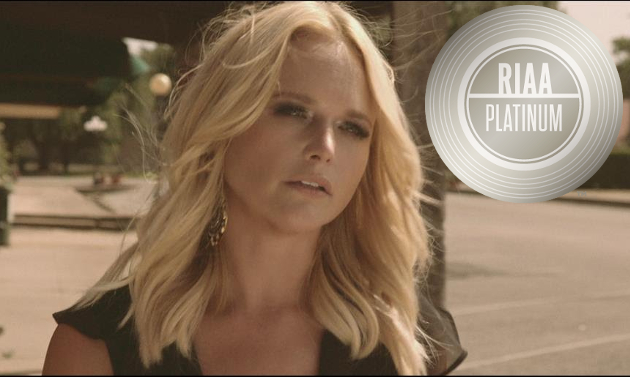 Another week, and another accolade rung up for Miranda Lambert.

After Miranda’s most recent album The Weight of These Wings was certified Platinum in early July, the album’s lead single “Vice” has also now been certified Platinum by the RIAA. Originally released on July 18th, 2016, it shot up the Billboard Hot Country Songs chart to #2 upon its debut and is a favorite of many Miranda fans, even if the track exhibits a bit more pop sensibility (and was co-written by Josh Osborne and Shane McAnally with Lambert) than the rest of the singer/songwriter material that mostly defines The Weight of These Wings.

The fact that “Vice” has now gone platinum is not entirely surprising as a lead single from a mainstream country star, but what is surprising is the song never cracked the Top 10 on country radio during its ascent. “Vice” stalled out at #11 before being moved to recurrent, even though on the much broader and consumer-based Billboard Hot Country Songs chart, it made it to #2.

This underscores an issue that is common for country music women when it comes to radio. Despite strong consumer reception in certain cases, radio doesn’t follow suit, while it’s vice versa for the men. For example, Miranda Lambert’s “Tin Man” currently sits at #33 on the Country Airplay charts—it’s highest placing so far. Yet on the Hot Country Songs chart, which factors in streams and downloads, it’s already hit #15.

Reverse that trend for many male country artists. For example Cole Swindell’s latest single “Flatliner” made it all the way to #2 on the Country Airplay charts, which you may assume would parallel a rise to the top on the Hot Country Songs chart as listeners hear the song on the radio, and decided to download or stream it later. But “Flatliner” stalled at #10 on the Hot Country Songs chart—inverted from the experience many singles from women see.

Simply put, when measuring actual consumer sentiment, the singles from country music’s women generally outpace their performance on radio, especially compared to the ratios of male stars, even as the male stars benefit from more exposure via radio play. The males do better on radio because the placing of songs on radio is virtually preordained by the industry, while women are often systematically ignored.

That is why the theory that men are doing better in mainstream country because the women would rather listen to men does not always hold water. And Miranda Lambert isn’t the only example. Kacey Musgraves’ “Follow Your Arrow” could only manage #43 on country radio, while hitting #10 on the Hot Country Songs chart. What was basically her final radio single, “Biscuits,” stalled outside of the Top 40 on radio, but made it to #28 on the Hot Country Songs chart.

Of course when you have a song such as Sam Hunt’s “Body Like a Backroad,” which has now logged it’s 27th record-shattering week at #1 on the Hot Country Songs chart, all theories go out the window. But it is interesting to witness the discrepancy between country music’s two songs charts—Country Radio and Hot Country Songs—and see that country fans do want to hear the women. They’re just not hearing them on the radio. That’s how a song can go Platinum according to the RIAA, and not even make it into the Top 10 on the radio charts.