Review – Maddie & Tae’s “Girl In A Country Song” on Letterman 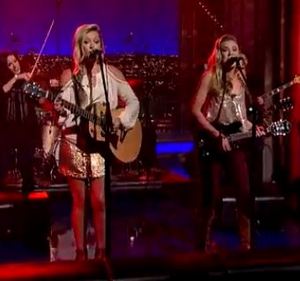 Despite their “new kid on the block” status, Maddie & Tae and their timely tune “Girl In A Country Song” are leading the pack when it comes to the anti “bro-country” movement in the mainstream. Though the song has maybe not done as sensational as label owner Scott Borchetta was hoping for from the singing duo, it’s performance so far has been quite solid on the charts for an non-established female act. On Friday the duo stopped by The Late Show with David Letterman for a performance of “Girl In A Country Song,” and Letterman announced on the show that their debut EP will be released through Big Machine’s Dot imprint on November 4th. Unfortunately though, their performance did not live up to the hype this song has been receiving.

From the start, it was clear Maddie & Tae were playing to a pre-recorded backing track. Immediately you were hearing instruments (or non-instruments) that were not present on stage. “Girl In A Country Song,” like so many of today’s “country” hits, starts with an electronic beat. So did their Letterman performance, but there was nothing on stage responsible for it. There’s also other electronic drops like a whistle that have no origination point on stage. And for the record, drummers can be supplied with trigger pads to re-create electronic drum beat sounds in the live context, and this would have been completely appropriate for this setting. Even though it wouldn’t have been very “country,” it would have been better to even have a DJ on the stage adding some of the electronic accoutrements if necessary. Or here’s a novel idea: not have them at all. A side shot of the drummer early in the performance shows an open laptop, so perhaps this is where some of the unmanned sounds were emanating from, but the more likely scenario was most everything was played and mixed at an earlier time.

The other dead giveaway that little to no of the instrumentation was live was an acoustic strum at the 1:27 mark that in no way sync’s up with what we see on the screen. Playing to a backing track is not highly unusual on a show such as this, but it plays right into the hands of Maddie & Tae critics who say they’re not a bro-country alternative, they’re just an alternative version of the same marketing, especially when it was executed so poorly and obviously as it was done in this case. The girl playing the fiddle was also way too over-the-top, flashing her $700 teeth whitening procedure, and generally diverting attention from where it’s supposed to be: Maddie & Tae. This may have not been Ms. Fiddle’s fault and may have been the call of a stage choreographer. Either way it seemed inappropriate to the performance.

For Maddie & Tae’s part, they were perfect when it came to their singing parts, and there’s no indication that they didn’t perform their vocal parts live. Both of these girls are great singers, and this was the one redeeming element of the performance. And ironically, I thought the pre-recorded performance they mimed to was not a bad mix of the song. However I still wish there wasn’t such an effort to doll these girls up so much. I can’t tell you what either of these girls look like in real life beyond the peroxide and poof poof. Their authenticity is being drowned in glitz.

Though I cautiously root for Maddie & Tae and “Girl In A Country Song,” if they’re going to make it big in country, and in the space vacated by an artist like Taylor Swift who won over America by being the “girl next door” songwriter who wasn’t afraid to bare her flaws, they’re going to have to work less on being perfect, and more on being real.