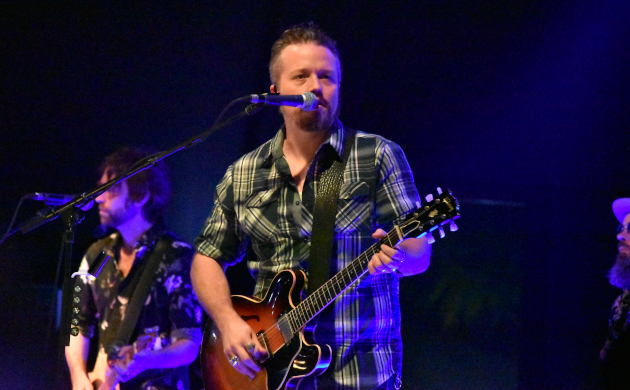 Jason Isbell and the 400 Unit have announced their sixth studio album to be released on May 15th called Reunions. Once again produced by Dave Cobb at Nashville’s Studio ‘A’, it immediately becomes one of the most anticipated releases in country, roots, and Americana in 2020 due to the prestige and respect Jason Isbell has minted for himself over the last few years of stellar, critically-acclaimed, and award-winning releases.

Ahead of the new album, Jason Isbell has released the blistering and politically-charged anthem “Be Afraid.” Far from roots or even notions of Americana, it’s only fair to label the track as a rock song, with a highly-charged political message that not only finds Isbell refusing to “shut up and sing,” and not only compells other artists to rise and resist as well, but takes the message even further by calling out artists who refuse to use their platform to espouse political ideologies parallel with Isbell’s with lines like, “If your words add up to nothing then you’re making a choice, to sing a cover when we need a battle cry.”

But as vogue as it is at the moment in Americana music to wax political (including recent albums and songs from the Drive-By Truckers, Will Hoge, and many others), “Be Afraid” takes the same severely shortsighted notion of how to effect change in culture, while completely misunderstanding why some people and performers—including the politically active, and including the politically active with views aligned with Jason Isbell—turn to music to divest from the politically-charged moments we live among, and shouldn’t be judged for doing so.

There is a big difference between telling an artist to “shut up and sing,” and wishing they would not polarize their music or public persona with terse, political messages that cast wide aspersions on people, and in this case, simply for not wanting to get political in music. “Be Afraid” is latest example of letting anger and ideology cloud judgement, while passing severe judgement upon others for inaction, telling them their “words add up to nothing,” and from a powerful voice in American music, rendering this song not just misguided, but potentially dangerous in it’s terse, closed-minded, and severe ideology.

Furthermore, the notions that “Be Afraid” assert that if you speak out against the current administration or social repression, then you risk retribution is just incorrect. Isbell tells Rolling Stone Country, “I’d like to be able to say, ‘I did what I could, I did part of what I could,’ or you know, something that’s not just, ‘Well, I had records to sell, so I kept my mouth shut.’ I’ll never lose sleep over not selling more records, but I’ll definitely lose sleep over keeping my mouth shut and letting things happen to people who are minorities for whatever reason, be it gender or their race or their sexual preference or the fact that they ‘like science.’”

Editor’s Note: The comments of Jason Isbell in Rolling Stone Country were taken from a previous interview in 2018, and applied to his new song. They were not about “Be Afraid” specifically.

But this is not 2003 when the Dixie Chicks faced a backlash. In fact numerous mainstream country stars have spoken out politically recently on things such as gun control, immigration, or even just having the right to speak out, including Maren Morris, Dierks Bentley, Little Big Town, Tyler Hubbard of Florida Georgia Line, and Kacey Musgraves, and have weathered it just fine, if not profiteered in favorable press coverage and awards.

The fear of speaking out these days is not being shouldered by the left. It’s being sowed by them, branding anyone who dares to step out of a very narrow, black and white dogmatic ideology as racist, sexist, homophobic, or any number of other scarlet letters in the rise of cancel culture which is very directly stifling speech, and disrupting the free flow of ideas not seen since the repressive family values era of the Reagan Administration. This is the reason comedians and free speech advocates are finding more traction than ever, and left-leaving performers and ideologues such as Dave Chappelle and Bill Maher, and even Barack Obama are speaking out about the trappings and misguidedness of “woke” culture, and how it’s fueling a backlash that is counter-productive to the ideals being pushed.

Jason Isbell also approaches this song with the same tunnel vision that so many who speak out for everyone to rise up and engage in political action have. Many people may feel empowered or emboldened by “Be Afraid” to speak up. But just as many who believe counter to the ideologies of Jason Isbell might be compelled to take action, and speak out for their own ideologies as well. In fact if history teaches us anything, the likelihood is the boomerang effect of a message will be greater. It was the Million Mom March in Washington after the massacre at Columbine High School that was the biggest one-day recruitment and fundraising effort for the NRA in history, and codified the organization as America’s most powerful lobbyist. It’s been the impeachment of President Trump that has filled his campaign coffers with record donations, buffered his approval numbers, and emboldened his base. It was Taylor Swift’s endorsement of a Democrat Senatorial candidate in Tennessee that swayed the electorate towards the Republican. It is the kind of “all or nothing” ideology found in Jason Isbell’s “Be Afraid” that got Donald J. Trump elected President in the first place, and why he is very likely to be elected again.

There is nothing wrong with expressing political beliefs in music. And if people don’t like it, they can just not listen. But calling other artists to action like a Mullah in a Madrasa while characterizing that another artist’s “words add up to nothing” if they don’t speak up is a step too far. Right now the Americana music scene is running a severe risk of being overrun by political ideologues, which ironically, repels the very people who possibly could benefit from more reasonable, cool-minded messages about equality and acceptance served in more subtle, nuanced, objective and wise manners. In the world of Jason Isbell’s “Be Afraid” you are not acceptable if you choose to not speak out. And as the current King of Americana, those words have a great impact. There is a lot of peer pressure to get political in Americana at the moment, or risk being ostracized. “Be Afraid” puts words and actions behind that fear.

Also, “Be Afraid” is just another symptom of the way culture is being indoctrinated and polarized by the media into believing we’re living through the worst of times, when the work of Harvard’s Steven Pinker, to one statistic after another proving that crime is down, wealth is up, inequality is shrinking, and minorities and women are receiving more opportunities than ever are undeniable. That’s not to say there still isn’t incredible work to be done towards true equality, or that some people still live in communities that present severe challenges. But this idea that life in the United States is so severe, everyone must speak up and take action is simply a symptom of the proliferation of social media into our daily lives, and the polarization the electorate due to the political and media industrial complex gaming the American mind, and everyone wanting to blame everyone but themselves for the problems of the world. The notion Jason Isbell forwards in the song that the “facts” are always in favor of one side underscores this. People are pissed off at Trump. But polarizing every aspect of society until there is change is what is assuring there won’t be any, as everyone just retreats to their corners, holds firmer to their ideology, and nuance is bled from discussion.

These opinions about “Be Afraid” will be cast off as redneck sophistry by many. But the truth is that to preserve the power of music to truly enact change in culture as one of the few things that can bring people together, the notions found in “Be Afraid” must be challenged. But the song is not a total loss either. As always, Isbell’s turn of phrase is smart, even if the message isn’t. And in the second verse when Isbell talks about growling at the guy who just tuned his guitar, and not recognizing your own kid in the wings, he speaks to the dichotomy and loss of perspective that comes with stardom. By centering more on that, and how we’re all flawed—even those that have public forums to speak out—and rolling off the notion that if you don’t speak out you’re basically part of the problem could have rendered “Be Afraid” as productive. But instead, the militant political messages far outweigh the positives which will assuredly receive great praise by the press, but do nothing to tilt the scales of power in the United States, or if anything, will tip them away from the ideology of Jason Isbell espouses.