(Editor’s note: This is a rare Saving Country Music guest contribution. It comes from Deb Bose, aka Windmills Country, originally posted it at mjsbigblog.com. You can also follow Windmills Country on Twitter.)

Billboard and the echo chamber that is much of the entertainment media/blogosphere made much hoopla last week over Florida-Georgia Line’s “Cruise” breaking the all-time record for weeks at #1 on the Hot Country Songs chart. With 22 weeks and counting atop the Billboard Hot Country Songs chart, “Cruise” surpassed the 21-week totals accumulated by Eddy Arnold’s “I’ll Hold You in My Heart (Till I Can Hold You in My Arms)” in 1947-1948, Hank Snow’s “I’m Moving On” in 1950, and Webb Pierce’s “In The Jailhouse Now” in 1955. Although Billboard acknowledges that this happened because of its new chart methodology (introduced in October 2012) incorporating airplay from all genres, paid digital download sales, and streaming into chart rankings for its genre-specific Hot Songs charts, it has failed to acknowledge how much this new chart record misrepresents the real impact of “Cruise” compared to other big country hits.

Closer scrutiny of the charts shows that, contrary to the flashy press releases and hype you may see regarding Florida-Georgia Line’s “Cruise,” its “record-setting” week is the historical achievement that isn’t. As I will show below, Cruise” isn’t even the biggest country hit in the past 3 years, never mind all time. The fact that “Cruise” is now Billboard’s record holder is the direct result of the timing of a methodology change, and if the same methodology were in place 7 years ago, “Cruise” would now rank 3rd or 4th among country crossover hits. Not first, and not close to first.

Let’s start by acknowledging the following: with 5.35 million in download sales and counting (41% and counting of that total from a remix of the song featuring rapper Nelly according to Wade Jessen of Billboard), plus major cross-format airplay that led to a #1 peak on the country airplay charts followed by top-10 peaks on the CHR/Pop and Adult Pop/HAC airplay charts, “Cruise” is an undeniably huge hit. Let’s also acknowledge Billboard’s well-intentioned desire to capture the changing environment for music consumption, which is what prompted last October’s move to carry the Hot 100 methodology over to genre-specific songs charts. 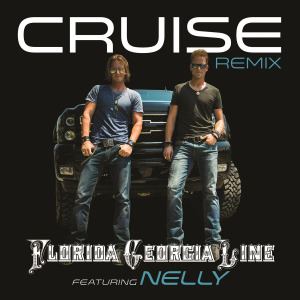 But let’s also note the problems with the change. Foremost, the incorporation of airplay from other formats basically handed control of the top of Billboard’s genre-specific Hot Songs charts over to programmers of the format that generates the largest audience impressions: Contemporary Hit Radio(or CHR)/Top 40. Because CHR/Top 40 programmers allot significantly more spins to their top songs than country programmers, more than twice as many in most cases, top 10 CHR/Top 40 hits generate larger audience impressions than top 10 country hits, and that’s before you consider the spillover from CHR/Top 40 playlists into Adult Top 40 (or Hot AC) and Adult Contemporary playlists. A look at the current Billboard airplay charts shows that the #10 song on the Billboard CHR/Top 40 chart (“Same Love” by Macklemore & Ryan Lewis featuring Mary Lambert) racked up higher audience impressions (49.558 million) than the current #1 song on the Billboard Country Airplay chart (“Runnin’ Outta Moonlight” by Randy Houser, which racked up 45.785 million AIs).

How Billboard Overstates “Cruise”s Impact Compared To Other Crossover Hits

Now, let’s dig deeper to show just how unrepresentative the current Billboard Hot Country Songs historical ledger is when it comes to chart impact. To do that, let’s look at the airplay peaks and sales of some of the biggest crossover hits of the past seven years (arranged in chronological order of release) 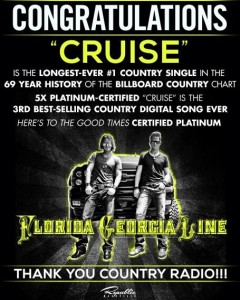 So “Cruise” is the #3 digital download seller, its host album is at less than 1/4 of total sales of other albums with big crossover hits and unlikely to ever reach their sales levels, its pop airplay peaks are lower than those of “Need You Now,” “Love Story” and “You Belong With Me,” and it spent less time at #1 on the country airplay charts than “Need You Now” and “Before He Cheats.” Yet the historical record represented by Billboard Hot Country Songs claims that “Cruise” is by far the biggest Hot Country Songs hit.

Well, the closest we can get to assessing this question is to comb through the Hot 100 charts, which since February 2005 have reflected the top songs by all-format airplay and paid digital downloads. As of October 2012, the Billboard Hot Country Songs chart is simply a distillation of the top country songs on or eligible to chart on the Hot 100. So, using Hot 100 rankings for country songs over the past 8 years will give us an extremely close approximation of what the top of Hot Country Songs chart would have looked like had it been constructed using the methodology used today (the only difference is that streaming data is absent from Hot 100 calculations prior to March 2012 in the case of Spotify and other audio streaming services and prior to February 2013 in the case of Youtube and other video streaming services).

I went back through the Billboard Hot 100, starting with the October 7, 2006 chart and noted the top charting country song on the Hot 100 every week, which would have been the #1 ranking song on the Billboard Hot Country Songs under the new methodology (minus streams, but those often favor crossover hits, anyway). Here’s what I found:

Total weeks “Before He Cheats” spent as the top ranking country song on the Hot 100:40

Total weeks “Need You Now” spent as the top ranking country based song on the Hot 100: 33

Lengths of other notable reigns as the top ranking country or country based song on the Hot 100:

“Cruise” has just achieved 22 weeks as the top ranking country based song on the Hot 100, but had the same Hot Country Songs methodology been in place 7 years ago, it would still be months away from catching Lady Antebellum’s “Need You Now,” Taylor Swift’s “Love Story” (arguably), and Carrie Underwood’s “Before He Cheats.” With “Cruise” now on the decline, Luke Bryan set to release a new album on 8/13 and hits by Randy Houser and Hunter Hayes gathering airplay and sales momentum, it is unlikely “Cruise” will be able to maintain its perch as the top ranking country song for the time needed to match those other crossover hits.

What’s illustrated above is why Billboard’s crowning of Florida-Georgia Line’s “Cruise” as the longest Billboard Hot Country Songs chart-topper of all time is a milestone without meaning. As music awards season heats up, we can likely expect a lot of crowing from Florida-Georgia Line’s team about “Cruise’s” achievement and why it’s necessary for the industry to acknowledge it over more acclaimed, substantial and risky work like that of country singer/songwriter Kacey Musgraves. But as you can see, this is a historical accomplishment that isn’t, and it exposes more than anything why Billboard importing the 68 year history of the Billboard Hot Country Songs chart into the chart with this new methodology has compromised Billboard’s status as a reliable and representative historical chart authority. There is more reason than ever to not believe the hype.