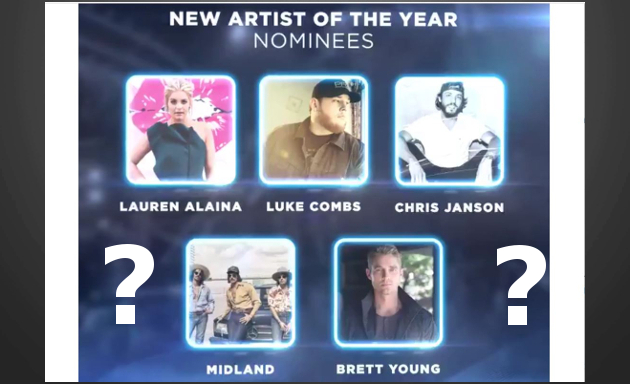 There’s nothing new about staring at the “New Artist” nominees for a country music industry awards show and being bewildered at the names you see. It’s an annual exercise. This year the names included in the CMA’s “New Artist of the Year” category were no different. We should probably cheer any time a woman is recognized in a non gender-based category in country music because it’s so rare, but there’s nothing about Lauren Alaina that is “new.” She competed on American Idol in 2011, and released a debut album that went #2 on the country charts and sold 300,000 copies. She also had a Top 20 single in 2011 with “Like My Mother Does.” That was seven years ago, during Obama’s first term as President.

Big Machine artist Brett Young may be a little bit more wet behind the ears since he didn’t chart a single or record until 2016, but he was nominated for the CMA’s “New Artist” last year. It would seem reasonable to think that what was new in 2017 would no longer be new in 2018. And these nominations probably wouldn’t feel like such a foul if the CMAs hadn’t passed over an artist such as Ashley McBryde when making them. She does feel “new,” and could probably use the boost in recognition a nomination would bestow more than Brett Young or Lauren Alaina.

2018 CMA New Artist nominees Midland and Luke Combs are probably more what we think of as “new” artists, and they’re also probably the two most likely candidates to win the award in 2018. But Luke Combs was nominated last year too, as was Lauren Alaina. Include Brett Young, and three of the five CMA “New Artists” in 2018 are rollovers from 2017.

The truth of the matter is that whether it’s the CMAs or the ACMs, the “New Artist” categories are simply a 2nd tier award for 2nd tier stars who the industry is looking to anoint into the top tier in the coming years. When you approach pondering the nominations from that perspective, then they don’t look so out of joint. You can talk about perhaps tweaking the nomination process to make sure more actual “new” artists get nominated, but there appears to be little to no desire to do that within the industry.

In fact in 2014, Justin Moore was nominated, and then won the ACM’s “New Artist of the Year” trophy, despite being clearly ineligible by the ACM’s own stated rules. Saving Country Music raised a stink about it. The ACMs responded by saying the nomination was in “the Board’s right to be flexible in our efforts to be inclusive vs. exclusive of a young artist who has had budding success.” In other words, the rules don’t matter anyway. When the ACM rules were re-written, they were worded to make sure such an embarrassment didn’t happen for them again, not to make sure an artist who was clearly ineligible (and certainly not “new”) would win anyway.

But if you think this misleading practice of nominating and awarding “new” artists is exclusive to the mainstream, you’re not paying full attention. In 2017 at the Americana Music Awards awarded their “Emerging Artist of the Year” award to fiddle player, songwriter, and performer Amanda Shires. Good for Amanda, and you’ll find few to say she does not deserve a trophy for her contributions to Americana. But this is an artist who released her first record in 2005. She was a fiddle prodigy in Texas, once touring with the Texas Playboys while still a teenager. She was touring with the Thrift Store Cowboys ten years ago. When she started touring with Jason Isbell as an accompanying fiddle player (and helped sober him up), she was arguably just as big of a name, and as well-accomplished as him, and was releasing her own solo albums. It’s only because some discovered Shires through Jason Isbell that she became “new” to them.

This brings us to the second problem with labeling an artist “new” or “emerging” that is anything but, which is inadvertently discounting the artist’s legacy heretofore. When Pat Green was nominated for “Top New Artist” for the 2004 ACM Awards, he was nine years removed from releasing his debut album. Pat Green was one of the founders of the Texas music scene, and had cultivated an incredible following and legacy before Nashville ever began paying attention and decided to sign him to a major label. Pat Green was new to many in Music City, but the people back in Texas whose Pat Green beer koozies had long since flecked off all of their lettering got a hearty laugh from the nomination.

That shows you just how far this “New Artist” controversy goes back, and how misleading, or dependent on the perspective the whole nominating process can be. It also shows how insulting it can come across. Lauren Alaina and Amanda Shires aren’t “new” or “emerging.” They’re accomplished women of music. Meanwhile there’s artists out there who actually are “new” who probably have a right to feel slighted when a 7-year veteran of the industry gets nominated ahead of them.

And this “New Artist” controversy is not just confined to award shows. Each month Rolling Stone Country and other similar sites roll out lists of the “10 New Country Artists You Need to Know,” or something similar. On the surface, this is a very noble exercise, helping to give a boost to up-and-coming names who need press to get out into the channels of consciousness of music consumers. But just like award shows, often there’s little or nothing “new” about the artists being highlighted, and labeling them as such can be insulting to their previous efforts and output.

For example in Rolling Stone Country‘s “10 New Country Artists You Need to Know” installment for August 2018 was honky tonker JP Harris. Saving Country Music started featuring Harris as far back as the spring of 2012. Harris has been a road dog and an important member of the independent country music community for many years. Props to Rolling Stone for finally paying attention. But just because JP is new to them, doesn’t make him new, period. Also highlighted in the most recent “10 New Artists” article was North Carolina’s Town Mountain. The bluegrass outfit released their first record 10 years ago.

Again, it’s noble that Rolling Stone Country has decided to showcase cool, independent artists, but these weekly and monthly lists do little more than reverse troll fans bases to drive traffic to websites. The artists feel compelled to share the press via social media, their fans share it in congratulatory form, but few people are digging through these lists looking for new music. They’re going there to reinforce their fandom.

There are not 10 new artists you need to know in country music each month. There may be less than 25 new artists you need to know about in a given year. And by herding up artists to fill pre-slotted weekly or monthly content, you just add to the din of over-information that works to bury new artists as they vie for attention, especially if they’re placed right beside 5 to 10-year veterans with established fan bases. Same goes for the “10 Albums to Stream This Week” and “Ten New Songs To Hear This Week” posts. This is just a lazy way to try and cover more artists and create content as opposed to focusing in on the few new artists and albums who are worthy of press, and a step up in recognition. If every artist is eventually featured in Rolling Stone, what value does the distinction have?

And by having to pre-fill 10 artists each month into “New Artist” lists, you also stretch the boundaries of what is country, or even Americana, especially when you enact well-intentioned, but often misguided diversity quotas. In August of 2017 when Rolling Stone Country featured east Nashville jangle pop artist Tristen in their monthly list, she chimed in, “I’m NEW and I’m Country!” Of course, neither were true. Tristen Gasparadrek released her first record in 2008, and though earlier in her career she definitely had a rootsy sound, she’s worked to distance herself from the catch-all “country” term all Nashville artists often get misappropriated with. Though Tristen took the distinction in stride and with class, clearly it’s overlooking her legacy, and her autonomy of creative expression.

The myopic focus on Nashville also burdens these “New Artist” distinctions, from periodicals to award shows, from artists local to Nashville like Tristen, to artists from Texas like Pat Green. Nashville loves to think itself as the center of the musical universe, and this often shades out many of the best “new” artists from other locales who actually deserve distinction.

But when criticizing the annual, constant failings of these “New Artist” categories, you do have to appreciate that often the heart of the organizers is in the right place. The Grammy Awards do a pretty good job finding new artists worthy of recognition each year in their “New Artist” category, but it’s also one of Recording Academy’s all genre awards, so they have a wider field to pull from. The problem is not trying to single “new” artists out for distinction itself. The music industry is so cutthroat, this is essential to staff the ranks of performers with new blood and spirit each year. It’s a worthy and important exercise. The CMA started awarding new artists in 1981, first calling it the “Horizon Award.” And looking back through the list of winners, the award show usually got it pretty right. It’s often the nominations that stir the controversy.

If a “New Artist” nomination is going to have any meaning, it must pass a common sense sniff test. The artists must be new. It must be something more than just a participation acknowledgement for 2nd tier stars. Then when an artist is nominated or awarded, a majority of people recognize it as a legitimate honor, and it can help continue the groundswell behind a promising young star whose contributions may become significant to music, and help carry the legacy of country music forward into the future.