“Something In The Water” Becomes Bro-Country’s Coffin Nail

It was May of 2014, and Bro-Country was at the apex of its hold on mainstream country music. Florida Georgia Line and Luke Bryan constituted a monopoly at the top of the country charts, and the women of mainstream country were virtually nowhere to be found. The only three female artists who’d been able to mount any sort of charge against the mainstream country patriarchy over the last few years had been Taylor Swift, Carrie Underwood, and Miranda Lambert. But Taylor Swift was nearly two years into her album release cycle with no new singles to speak of, and behind the scenes was readying her shift to pop. Carrie Underwood was in a similar boat, with her last album released in 2012, and the final single released in April of 2013. So it was up to Miranda Lambert to see if she could disrupt the sausage fest at the top of the country charts, and she had a plan.

With Carrie Underwood not promoting any current singles that could be seen as competition, Miranda reached out to Carrie to see if she would be interested in a collaboration. The idea was to put these two female country music superstars on the same song and combine fan bases to create a super song to puncture the Bro-Country blockade. I’m a big fan of hers, and asking her to do this was nerve-racking,” Miranda said to Associated Press at the time. “I sent her an email, this long, blobbing email about if she wanted to sing on the record, it could be cool, but maybe she didn’t want to, if she liked the song, but she didn’t have to like the song. When I sent it I thought, ‘This sounds ridiculous.’” 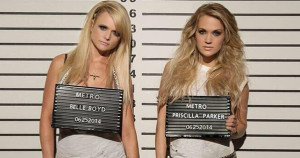 But Carrie Underwood accepted, and the collaborative single “Somethin’ Bad” came into being. Think of it: The two biggest female names in country joining forces. It was a powerful idea. As Saving Country Music said at the time, “Despite what the duo may or may not say or allude to publicly, ‘Somethin Bad’ has one primary purpose: to break through Bro-Country’s stranglehold on country music. The Bro-Country phenomenon has lasted for too long, and the pairing of country music’s two top females may be the only way to break the Bro-Country monopoly. ‘Something Bad’ is the symbolic, ‘We are the women of country, hear us roar!’ statement.”

Miranda said about the song before anyone had even heard it, “We’re coming together as a force ”¦ If you’re sitting on the front row, you might want to scoot back. It’s a force, you know what I mean? It just feels exciting to me ”¦ It’s been too long since two girls in our genre have come together like that.”

The setting was the Billboard Music Awards where the song and collaboration would debut on May 18th in a live performance. Earlier in the day at rehearsals, Carrie Underwood and Miranda Lambert were photographed wearing matching Thelma & Louise T-shirts. Country music was frothing with anticipation at what the collaboration might entail, and the rhetoric preceding its unveiling was all about how how “ass kicking” the collaboration would be.

Then when it was time for Miranda and Carrie to take the Billboard Music Awards stage and share “Somethin’ Bad” with the world, some were bobbing their heads along, but some were shocked at the smeared mascara shout fest unfolding before them. “Somethin’ Bad” wasn’t Carrie and Miranda battling Bro-Country by offering something better, it was attempting to battle it by stooping down to Bro-Country’s level. The usually congenial fan bases of both Carrie and Miranda supporters were curiously unfavorable of the song, but it showed itself to be fairly commercially formidable in the end, knocking off Luke Bryan’s “Play It Again” at the #1 spot on Billboard’s Hot Country Songs chart on July 12th, 2014.

But it’s reign at #1 was fairly short lived, and the “If you can’t beat ’em, join ’em” attitude of “Somethin’ Bad” meant the success of the song was a shallow victory. As Saving Country Music said in its review of the song, “In lieu of the duo battling bro-country with the brawn of their sheer star talent and doing what they do best, which is wowing audiences with singing prowess and powerful lyricism, Carrie and Miranda stole plays straight out of the Bro-Country coloring book and descended into vapid and story-less rhythmic superfluousness complete with unnecessary gesticulations and other showy nonsense that illustrated how amateurish and under-practiced they are at being really bad.”

“Somethin’ Bad” had been made under the false pretense that to defeat Bro-Country, you had to beat the bros at their own game, when in truth the better solution would have been to offer something completely different—something with substance, that showcased female country talent, and that carried some ties to country music’s past. And it still had to be something from one of country music’s leading females since they had already established that the country radio oligarchy would play them. Maddie & Tae’s “Girl In A Country Song” was a step better in the right direction, but still was saddled by relying too much on Bro-Country’s own modes to separate itself from the trend and become a song for the ages.

And then Carrie Underwood released “Something In The Water.” 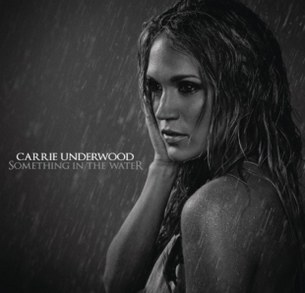 This song was unexpected in so many ways. First, Carrie Underwood, who’d revealed a month before that she was pregnant, was getting ready to release a new album, but it was a Greatest Hits compilation. That didn’t necessarily guarantee there would be a brand new, high caliber single that her label could get behind and make a serious contender for the top of the charts. It’s rare the new songs on a Greatest Hits release become the biggest singles of a singer’s career, or even one of their signature songs. Then there was the heavily religious quotient to the song that could turn some listeners and radio programmers off. How would such a non-secular song fare in this type of Bro-Country environment? Oh, and lets not forget Carrie Underwood is female, which holds its own disadvantages these days, top tier talent or not.

But what “Something In The Water” had that no other song that could offer battle to Bro-Country had previously was substance, and one of the most powerful performances we’ve heard from a country artist in the last few years. This is what was needed to defeat Bro-Country. It wasn’t going to take pandering. Leadership is what was needed, and an exhibition of raw talent that could not be denied. This was the alternative that would erode the appeal to Bro-Country, would make people realize just how shallow this trend had become, and just how appealing a powerful voice and message can be compared to catchy rhythms and lazy lyrics.

As Saving Country Music said in the review of “Something In The Water” when it was released in late September of 2014, “…it will be jeered as pure pop by many, but even with this assessment it still puts it in front of the garbled, directionless multi-genre hodgepodge presented by many of the genre’s top male stars. This is the true ‘anti Bro-Country’ salvo country music has been lacking one that doesn’t write its plan as the exact opposite of the scribblings in Bro-Country’s playbook, but one that blows the entire argument out of the water. Call it pop if you want, but the delineation the song truly strives for is ‘timeless.’

And what has happened subsequently? Four months later, and “Something In The Water” is not only still going strong, it has become the biggest charting single on Billboard’s Hot Country Songs chart of Carrie Underwood’s entire career, and counting. “Something In The Water” has now been atop the Billboard chart for seven straight weeks—a feat for a woman that has only been bested in the history of the chart by Taylor Swift’s “We Are Never Ever Getting Back Together” which sat at #1 for ten weeks in 2012/2013, and Hall of Famer Connie Smith’s “Once a Day” which was a #1 for eight weeks spanning 1964-1965. “Something In The Water” is on its way to becoming ‘timeless’ indeed, and in doing so, it is driving a nail in the coffin of Bro-Country, which was already in the process of faltering.

Is “Something In The Water” ideal for traditionally-oriented country fans looking for a return to genre’s glory days? No, no it’s not. But it is a step in the right direction for instilling both women and substance back atop the country music genre once again. It’s also fair to point out that just like the pop songs of Taylor Swift, which benefited under Billboard’s new chart rules, the reign of “Something In The Water” has benefited from heavy play and appeal to the Christian music market. But one of the great things about “Something In The Water” is the power of the performance and song transcends traditional religious biases, just like “Amazing Grace” does, which contributes its legacy to the song, and also gives it a traditional country element.

Let’s not start hanging “Mission Accomplished” banners just yet though. “Something In The Water” has still been fighting an uphill battle on country radio, and is still not receiving the type of airplay of similar blockbuster singles. As Windmills Country adeptly points out in a data-driven piece, women are still receiving disproportionate support on country radio. When regarding the recent chart successes of Carrie Underwood and Maddie & Tae’s “Girl In A Country Song,” it does appear that we are witnessing a change of the tide. But Bro-Country assuredly has some last whimpers to sound, and invariably something else, potentially more sinister may crop up in its place, just like how Bro-Country in some ways replaced the mainstream presence of country rap. Jason Aldean’s wildly-successful single “Burnin’ It Down,” and the uncanny rise of Sam Hunt signal this burgeoning trend of R&B and EDM-infused songs that really have no measure of country in them becoming the next big offense by country music’s male performers.

But as long as we learn the lessons from the success of “Something In The Water” to not chase trends, but to fend them off with substance and leadership, then at least a semblance of balance in the genre could prevail and propel the genre forward with music that is sustainable, unsusceptible to the volatility of trends, and at least tries to offer some variety and balance when it comes to gender and quality.

Bro-country may be dead or on its last legs, but unless country music learns its lessons and makes wise assessments in the aftermath of a hyper-trend that sullied the reputation of country music across American culture, it is destined to happen again.